Friday Feature: Excerpt from A Recipe for Murder, by Jo Hiestand #HolidayBooks 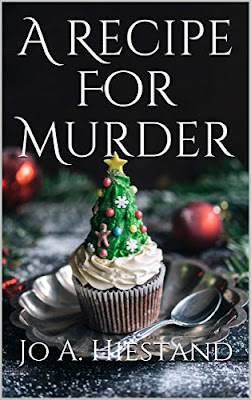 December bullies its way into the village in a swirl of snow and biting wind, threatening to cancel the annual St. Nicholas festival.  But winter’s slap pales when a body is discovered in the candlelit church.  Someone is not living up to the seasonal wish of ‘peace on earth, good will towards man.’

But the village harbors more than Christmas gifts, DS Brenna Taylor discovers as she and her colleagues from the Derbyshire Constabulary CID Team begin working the case.  There is the feud between two rival authors; a wife’s open disdain of her husband and his secret comfort in the arms of another woman; the pent-up emotions of a vicar’s wife forced to conform to idealistic conceptions; the tacit threat of a troubled teenager and his delinquent girlfriend.

Brenna also discovers emotions she didn’t know she had when DS Mark Salt, her harassing macho cohort, makes overtures of genuine friendship.  Now Brenna must not only examine her love for her boss, DCI Geoffrey Graham, but also consider the likelihood of its ever being returned.

As if sorting through the affairs of the heart and the tangle of motive and suspects in the case weren’t hard enough, a series of arsons threatens the very village itself.  And Brenna wonders if they are looking for two felons or just one very disturbed individual.


Excerpt from A Recipe For Murder:

“St. Nicholas isn’t included in the book. Father Christmas is but purely as a character in most mummers plays.  There are themes on him, certainly, but it’s always the same character, no matter his name or dress. Each country has its own gift giver and dark companion. He’s Schmutzli in Switzerland. He’s dressed in brown, has brown hair and a brown beard and his face is darkened with lard and soot, He carries a switch and a sack. Naughty children are beaten with the switch and then toted off in the sack, where he eats them in the woods.”

Graham shook his head, clearly astonished. “Amazing. Any others?”

“Many. Knecht Ruprecht is St Nicholas’ most common attendant in Germany.”

“No, sir. His name means Farmhand Rupert, or Servant Rupert.  He’s clothed in varying costumes, from a long brown hooded robe, fur, or straw. He carries a pack of presents or a sack of ashes.  He gives the gifts to the good children and beats the bad children with the sack of ashes.”

“I thought St. Nicholas gave out the presents.”

“I wouldn’t know, sir.  Knecht Ruprecht also carries switches, which he either uses on the disobedient children or leaves for their parents to use.  Occasionally he has his own companions, fairies or dark-faced-men made up as old women.  What that signifies, I don’t know. Pelznickel lurks in Germany’s Northwest area. His name means “Nicholas in Furs,” and he’s a variant of Ruprecht.  He usually dresses in dark or shaggy clothing, or furs or animal skins.  There are versions of this, though.”

“He wears a long, pale robe and a tall, peaked witch hat.  He carries away bad children, variously to his home in the Black Forest or to be tossed into the river.”

“I’m astonished the kids back then could sleep at night.”

“I think only the naughty lads and lasses had anything to fear, Mr. Graham. There’s one more I find fascinating, if you’d like to hear it.”

“These names are something else. Okay, what’s he like?”

“He’s a devil-like figure residing mainly in Austria, Slovenia, Croatia and southern Germany. He has goat-like horns, a long red tongue, and he holds chains or switches.”

“Presumably to use on those naughty children.”

“Yes, sir. He stuffs them into his basket.”

“To be taken away to some terrifying doom, no doubt. I’m afraid to ask if there are others.”

“Yes, sir. Holland, France, Spain, Italy for certain. I think each country or region has its own character to infer punishment if the child stepped out of line.”

“Maybe the police should use him, Taylor. It might scare certain folks into going straight.”