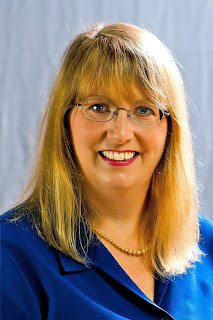 According to her author bio, Colleen grew up on a small farm in New Germany, Pennsylvania. After starting a family, she relocated to beautiful, scenic West Virginia. On Christmas Day in 2010, she woke with a stomach virus, and as she lay in bed missing her family’s Christmas excitement, she began writing Piper the Elf adventures. That first book, Piper the Elf Trains Santa, was published in 2012 by Headline Books... and she’s been writing stories (and winning awards) ever since. All four of her Piper books have been awarded Mom's Choice Awards, and the fourth book also earned the 2017 Preferred Choice Award from Creative Child Magazine.

I've been blogging a lot about "inspiration" as of late, and so I asked Collen what truly inspired her to write this series of children's books. Here's her response, where she relates the details....:

It’s a funny story. I had never dreamt of writing before I began this series of books, I had another career and was raising my four young children (ages 8-16). On Christmas morning in 2010, I woke up with a stomach virus. After the kids opened some Christmas gifts I was ready to collapse so I returned to bed. All day I heard everyone downstairs playing and laughing while I lay miserable in bed.

To make matters worse, the following day I was too weak to travel to my parents’ annual Christmas party in Pennsylvania, which is very special to me. I have 8 siblings so including the in laws, nieces, and nephews, there are usually around 40 people in my immediate family. I was so disappointed that my Christmas with my husband, kids and family was ruined.

The next day I was finally feeling better and able to get out of bed. Feeling sorry for myself,  I wondered what the elves did the rest of the year since Christmas was over. I thought if I were an elf,  I would knock on Santa’s door and ask him to play outside with me. Thus the genesis of Piper the Elf stories began.

Piper the Elf Trains Santa is about the elves playing outside with Santa, sledding, building snowmen, having snowball fights, etc. Having Santa popping his suit buttons was a great segue for Piper being Santa’s personal trainer and showing him that everyone can exercise and still have fun. All the Piper books have a fun adventure at the North Pole. The other three books are about starting a musical band, rebuilding Santa’s sleigh, and encouraging a young reindeer to fly. After I started writing, I realized I loved creating stories. I’ve been hooked ever since.

My first adult novel Finding Euphoria is coming out soon with The Wild Rose Press and I especially like weaving in unexpected subplots in my writing.

Thanks for sharing, Colleen! Check out the cute covers and brief excerpts below (with buy links, too) Perfect as read-to-me bedtime stories for the holidays, or for early readers, K-2. Cute stories and empowering, positive messages. 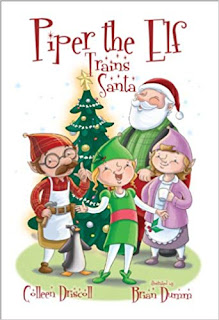 
Excerpt:
Piper the Elf lived with her mother and father, and of course, Santa Clause. Piper loved to go outside in the snow and play with the other elves. Some days they would go sledding. Other days they would build snowmen, and sometimes the elves would throw snowballs at each other. One day while Piper was helping her father make toys in Santa’s workshop, Mrs. Claus came up to the little elf.

Piper replied, “What do you need, Mrs. Claus?”

“Santa does not fit into his suit anymore and Christmas is in one month,” she said.   “He is eating too many cookies.  The buttons are popping off of his clothes.  Would you exercise with Santa?” Mrs. Claus asked, “I want you to be his personal trainer.”

“Sure,” said Piper.  She didn’t know what a personal trainer did, but she wanted to help Santa... 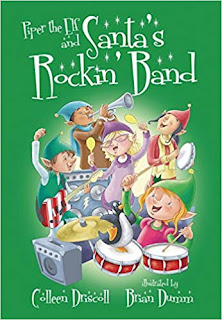 Can Piper form a band in time for Santa’s Christmas party?

Excerpt:
One morning Piper the Elf and her mother were helping Mrs. Claus bake cookies.
Santa and Piper’s father came into the kitchen to have some cookies and milk.
“Piper,” Santa told her, “I would like to have music at this year’s Christmas celebration. Can you start a band with your friends and play some songs?” Santa asked. “You could practice in one of the rooms at the Toy Shop.”
Santa always had a big party two days before Christmas to thank the elves for their hard work making toys.
Piper was so excited.
“Yes, Santa, I can put together a band to play for your Christmas celebration,” she said. “It will be a lot of fun.”
“Thank you, Piper,” Santa replied.
The next day, Piper asked her friends if they wanted to join the band. Piper said she would beat the drums. Jack wanted to strum his guitar. Lin said she would like to try playing the tambourine. Miles wanted to blow on his trumpet. Holly said she would shake the maracas.
Skinner said he was too busy painting toys in the Toy Shop to play in the band. After Skinner left, Piper and the elves decided to call their group, Santa’s Rockin’ Band.
When the little elves met for the first time to play their instruments together, the sounds were not in tune... 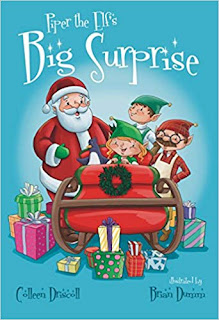 
What surprise does Piper have in store when she helps Santa repair his sleigh?

Piper the Elf was excited about Christmas. Each day Piper and the elves had fun making toys for Santa. One blustery afternoon, Santa looked troubled as he walked into the Toy Shop.

“I inspected my sleigh today and saw many holes rusted through the sides and bottom,” he said. “I’m afraid the toys will fall out as I fly through the sky on Christmas Eve. Can anyone help me in the evenings to patch the holes and repair my sleigh?”

The elves looked at each other and lowered their heads. No one volunteered to help.     Piper’s father said, “Santa, we work hard all day making toys. We are too tired to help you in the evening.”

Santa was disappointed, but he didn’t want to overwork the elves. They needed to work during the day to finish the toys in time for Christmas.

Piper bit her lip and thought. She had chores in the evening, but she didn’t want to upset Santa. She raised her hand. “I will help you,” she said. The elves stared with open mouths... 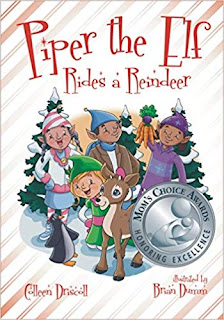 
When the newest reindeer comes to town, Piper is determined to help him fly.

Piper the Elf woke early one cold morning to help Santa feed the reindeer grazing in the corral by the barn. “Look, Santa,” she said, pointing to a small reindeer with stubby antlers. “We have a new reindeer.”

Santa walked over and smoothed the reindeer’s fur. “I wonder where this little fellow came from.”

Piper fed the animal a handful of moss and carrots from the bucket while Santa studied him. “I’ve never seen such gentle eyes,” Santa said. “They sparkle.”

The reindeer nuzzled his nose against Piper’s neck. “Where did he come from?” she asked.

“I’m not sure. There are many herds of reindeer around the North Pole,” Santa said.

Piper mounted the reindeer. He stomped his front hoof and arched his back until Piper fell in the snow. “Ouch!” she said, rubbing her backside.

Santa patted her shoulder. “I don’t think he wants to give rides yet.”

The reindeer stomped again. Piper held out a handful of carrots on her palm. “Can we keep him?” she asked.