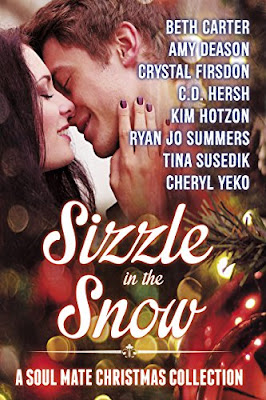 Sizzle in the Snow, a holiday anthology by various authors
Published 2015 by Soul Mate Press

Unlucky-in-love Brooke Woods finds herself with a Christmas delivery and it isn't from Santa. When her boyfriend leaves her for their neighbor, she heads to the nearest bar, meeting hunky, nice guy Anderson Bradley. The two only exchange first names, and their hot fling leaves them both wanting more but their anonymity makes that impossible.

Brooke never thought she'd end up in a hospital pregnant at Christmastime. Will a Santa Baby bring the new mother and father together or tear them apart?

When Grace Sellers needs to start over, she moves back to her old hometown with her two young children in tow. But the last person she expects to see is her high school crush, Michael Dennison.

Is this unexpected encounter a mere coincidence or a second chance at true love?

'TWAS THE CRAZY NIGHT BEFORE CHRISTMAS by Crystal Firsdon

"'Twas the night before Christmas, when plans led to danger
For Clara and Drew, who until now were strangers.
As they run for safety, desire comes fast . . .
Will they have each other, or is this night their last?"

Is kissing the Santa of her dreams worth the risk of ending up on the naughty list?

THE SNOW BIRD by Kim Hotzon

Lauren, a young single mother, is struggling to keep her children fed and a roof over their heads as the holidays approach.

Christmas is looking bleak until a sexy and wealthy property developer unexpectedly shows up in town, offering to repair her roof . . . and a whole lot more.

Years ago Paige and Shane experienced a tragic event in their romance. Unable to move past it, they broke up. Yet the passion remains, and she returns at Christmas time in an attempt to rekindle the love she and Shane once shared. It's a rocky road, and it seems they might not succeed until a freak accident shows them what they really have to lose.

Can Shane tame Paige's heart by Christmas? Or should they just let those still burning flames slowly die?

When Marci Hofer becomes fed up with the lack of attention from her husband, David, she decides to leave him. Devastated, he begins a campaign to bring her home. Calling it Operation Santa, he learns what he thought would be as simple as sending her gifts can backfire in the most embarrassing ways.

Will he survive the battle to get her back?

Steve knows he screwed up, but he's determined to reclaim the woman he loves and the babies she carries.

But when he sweeps back into her life on Christmas Eve, Amy's not sure she's ready to forgive him for abandoning her six months earlier.

As with most anthologies out there, not every story is as strong as the rest but as a collection they make for fun reading. Sizzle in the Snow is not an exception to the rule - some of the tales are good, some are simply okay, and some are downright wonderful. These are all tales of second chance romance, reconnecting with the one who got away. Or the one who's slipping away.

My absolute hands-down favorite tale was by Tina Susedik, Operation Santa. It's the story of a married couple who've maybe gotten a bit too complacent with each other, to the point where the wife is sure that her husband no longer loves her. When she walks out, he's determined to win her back - and goes to extremes... with hilarious results. Honestly, I couldn't help but picture my husband of 26 years trying to prove his love and having similar crazy things happen to him.

Other strong stories include Twas the Crazy Night Before Christmas by Crystal Firston and Amy Deason's Second Chances. I also really enjoyed the emotion in Ryan Jo Summers' Tamed by Christmas - except I really hated that one's title, since I found the "reason" behind it a little hokey, but the writing was strong and the story brought tears to my eyes.

All in all, this is a good mix of stories and authors and a fun group of short holiday tales, each perfect for a quick read before bed or with your coffee in the morning... or while you're waiting for that next batch of gingerbread men to come out of the oven. 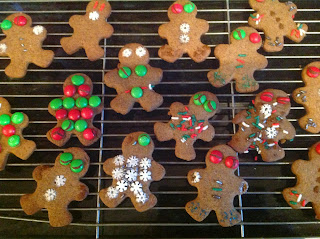