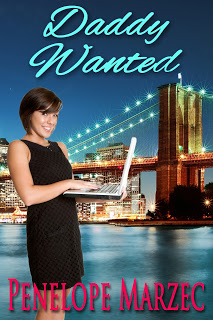 My guest today is author Penelope Marzac, who has a new book just out last week - DADDY WANTED.

Hi, Penelope! Give a brief bio and tell us what kind of books you like to read and write.

I started reading romances as a teenager and became hopelessly hooked on happy endings. A genuine New Jerseyan, I grew up along the shore of Raritan Bay. I became an early childhood educator and married an electrical engineer (from Brooklyn) with an accordion obsession. Together we raised three daughters. (They were all forced to take music lessons. They now claim the worst thing we ever did to them was to take them to organ concerts.)


Now retired, I have written romances in several subgenres: inspirationals, contemporaries, historicals and paranormals. Two of my inspirationals won the EPPIE award and one finaled in that contest. My paranormal, Irons In The Fire, was a nominee for Romantic Times Reviewers Choice award.

I paint seascapes in oils when I’m not writing. Now and then I sing while hubby plays the accordion.

My favorite part of being an author is the actual writing of the story in my head. It’s so much fun! There are other perks, of course, like sitting in front of the computer in my fuzzy robe and not getting dressed until noon.

Part of being an author is also promotion. I don’t find that as much fun as writing—although I do enjoy Facebook and Pinterest, but I have to limit my time in those place or I’ll never get any writing done!

I usually start out with the bare bones of a plot—a brief outline and a character list. I know the main characters quite well before I start and I know the ending. The rest of it gets made up as I go along.

I’ve always thought having the power to bi-locate would be rather useful. Nobody does it (except saints) as far as I know but it sure would be a handy superpower. Just imagine, I could be sitting at the computer writing my story AND folding laundry at the same time. I could be in two places at once.

LOL, I think every mom wants that particular superpower!! Now, tell us about your new release!

My latest release is DADDY WANTED. Set in Brooklyn, New York, it’s the story of Grace, a game designer. She wakes up one morning to discover she has lost her job and her roommate is pregnant. Determined to solve both problems, she searches for jobs online and sets up an ad to find a daddy for the child. How hard could it be in a city of eight million people? She soon learns it is both risky and dangerous. She wonders if Russell, who lives downstairs, is a safer bet, but why is he always stalking her? And why is it that the only one who will listen to her is her roommate’s turtle?

Russell, an IT repairman, is going to be the best man for a wedding in Minnesota. He needs a date, but the woman on his arm must be the Perfect Woman. According to his list of specifications, Grace will fit the bill—until he finds a pregnancy test kit box in the garbage. Deciding she’s only a little bit pregnant, he offers her a business deal, an all expenses paid trip to Minnesota with no strings attached. But when Grace insists on bringing her roommate along, Russell is in for a surprise.

Sounds like a really fun read! Okay, if you’re casting the movie of your book, who would you choose to play the main characters?

For the heroine, Grace, I thought Emma Watson with short hair would be perfect. For the hero, I think Seth Green would be great since he looks a bit geeky.

Where can readers find your books and where can you be found on the web?

Daddy Wanted is being published by Prism Book Group at www.prismbookgroup.com. My website, www.penelopemarzec.com, has a complete list of all my published books, but you can also find the books at Amazon, Barnes & Noble, Kobo, All Romance Ebooks, and other book distributors.

Thanks for stopping by to chat and share with us, Penelope!
Posted by Katie O'Sullivan at 5:00 AM