* This was a Puppy Tale I first told a few years ago, when Puppy first learned this "trick." We're busy trying to teach a new dog some of these old tricks now... although, she's technically an old dog learning a new-to-her trick... 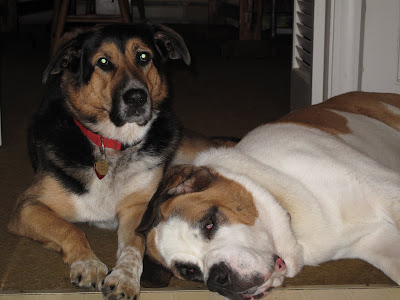 We have a tiny kitchen in our house. As in, there's no room for two big dogs to sit around the kitchen just waiting for scraps. None. Especially not for Puppy.

So one of the first "tricks" or commands our dogs need to learn is "Out of the Kitchen." So, while you think this pair is just laying there looking cute, they are really testing me. If you look closely you can see that the dog on the left has half a paw over the line onto the linoleum, and Puppy has part of her snout over the line. Not enough for me to yell at them, but enough to let me know that they're waiting.

What are they waiting for?

At the time I took these photos, I was cutting up leftover steak to make sandwiches for the boys' lunchboxes. The dogs were counting on getting some scraps. But they had to wait.

Which leads us to the next trick in the repertoire... 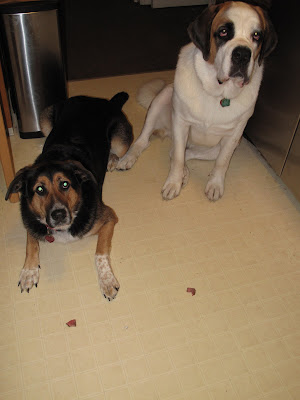 As in, we put down the scraps of steak and make them literally wait until we say "Okay." I can't take credit for teaching them this trick, as my husband is the one with the more twisted sense of humor sometimes. But it makes for a very impressive trick.

While Puppy seemed to understand "Out of the Kitchen" pretty quickly, this "Wait" trick took longer to master. You can see the expression of disbelief on her face even now - "Are you kidding? You're doing this to me AGAIN?"

But the next trick is even more impressive. And even more cruel... 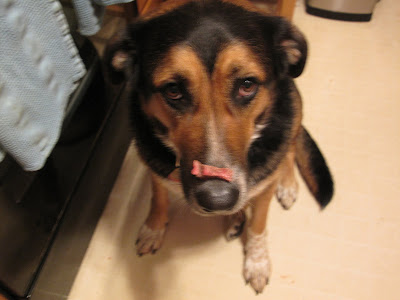 The dog has to sit with the piece of steak on her nose until we say "Okay." At the signal, she then tosses it into the air and catches it to eat. If it falls on the floor, she can't eat it and has to try again. This dog has gotten very good at catching food. Any food. Every time.

Puppy? Not so much. She can't catch. Or won't catch. She likes to sniff each piece of food before eating it, as if we were trying to trick her into eating medicine or something.

Someday maybe she'll learn to catch. For now I'm just glad she understands "Out" when I ask her to leave the room, or I'd never get anything done!
Posted by Katie O'Sullivan at 7:12 AM