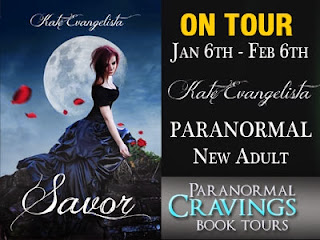 Kate Evangelista is on tour with Paranormal Cravings Tours and her latest release, SAVOR. I loved her novel TASTE and eagerly signed up for a chance to read an ARC of this book. So glad I did - here's my review, and tomorrow I'm posting an exclusive-to-the-tour excerpt, so don't forget to come back!

SAVOR is a New Adult hot paranormal romance by Kate Evangelista. It has some of the same characters as her debut YA novel, TASTE, which came out early in 2012, which is the only reason I know definitively that it's in the paranormal genre, because there's not a lot of supernatural stuff going on, except in the background. Here's the Goodreads blurb:

Mature and explicit content. Not recommended for readers below 18-years-old. Yup, you've got to be that old to read my story. Consider yourself warned.

I'm Dakota Collins, a tough talking, eye patch wearing, workaholic photography student. Why am I important? Well, maybe because I get to spend an entire month with Vicious, only the sickest indie rock band out there.


You see, I needed a subject for my Spring Showcase introspective in order to graduate. During a chance encounter at a club I'd been sent to cover for the Daily Gossip, our ironically named college paper, the features writer I usually teamed up with introduced me to the band--by accident, I might add. It involved a run in with a scary, bald bodyguard. Anyway, long story short, I signed a contract to take pictures of Vicious.

I should have known their handsome yet way too serious for his own good bassist, Luka Visraya, wouldn't be able to keep his hands to himself. He's gorgeous and all, but the way he smiles spelled trouble with a capital L. I'm in for a long month with him around.

Crazy stuff happens and then some I can't explain. So, if you want the skinny on Vicious and the events revolving around my stay at Lunar Manor, read my story.

Remember reading books when you were younger and being totally immersed in the story and the world, not wanting to surface from the book's "reality" into the "real world"? As if the book were a drug and you were high on the written word, not able to get enough or put it down or stop yourself?

That's how I felt when I read this book.

Now, maybe I was just ripe for needing a little escapism after the current hecticness of my "real" world, but this book was like a drug, pulling me under and blurring out the world around me until there was nothing left but Dakota's words and her world. I haven't felt this way about a book in a while - not just a chapter or a scene or a climax, but the whole book. Totally sucked in.

Dakota Collins is in her final year of college, working on a degree in photography with dreams of being the best in the world. The story is told in first person POV, and from the start we hear her feistyness, her snark, and her inner drive. We also hear a touch of her insecurities about her disability - an eye patch she wears like a protective shield against letting people get too close.

On assignment for her school newspaper, she encounters Vicious, a break-out hot new rock band who're on an unscheduled break from their world tour and happen to be playing the college club the newspaper is covering. Dakota is instantly drawn to the bass player, Luka Visraya, and boldly asks for permission to take their pictures for her senior project.

In TASTE, Ms. Evangelista introduced us to the world of the Visraya family, so if you've read her prior book you know more about them and their complicated back story than she lets on in this book. While I loved TASTE, this book shows how the author has matured as a writer, and truly embraced the New Adult genre with tons of sexual tension and innuendo, and a handful of scorching hot scenes between the main characters.

Ms. Evangelista lets the story unfold organically, staying right in Dakota's head the whole time. There's no annoying backstory dump, although the reader is left wondering what caused Dakota's injury, a horror story that unfolds slowly through nightmares from which the main character awakes screaming.

Kate Evangelista writes New Adult better than anyone. Her first person POV sucks you into the story and drags you along at breakneck speed, not letting you up for air and leaving you breathless and panting for more when you reach the end. Her writing is like a drug that you can’t get enough of.

The ending, however, is totally unsatisfying as it's a lead in to the next book and leaves EVERYTHING unresolved. Think Hunger Games book one ending, and you'll feel my pain. I know some readers are turned off by this sort of thing, so be warned. You might want to wait to read this until book two is available so you can dive right into the next one. But it didn't stop me from thoroughly enjoying this book and Dakota's story. And I totally can't wait for the next book in the series!


About the Author (From Goodreads):
When Kate Evangelista was told she had a knack for writing stories, she did the next best thing: entered medical school. After realizing she wasn't going to be the next Doogie Howser, M.D., Kate wandered into the Literature department of her university and never looked back. Today, she is in possession of a piece of paper that says to the world she owns a Literature degree. To make matters worse, she took Master's courses in creative writing. In the end, she realized to be a writer, none of what she had mattered. What really mattered? Writing. Plain and simple, honest to God, sitting in front of her computer, writing. Today she lives in the Philippines and writes full time


AND THERE'S A RAFFLECOPTER GIVEAWAY - Kate is giving away 5 ecopies of her first book, TASTE. Click below to enter!

a Rafflecopter giveaway
Posted by Katie O'Sullivan at 6:58 AM