Tracey Ward is touring this month with LRT blog tours, and I’m so excited to help promote her new book, SLEEPLESS. It was just published at the beginning of January, and I received an ARC for review as part of this tour. 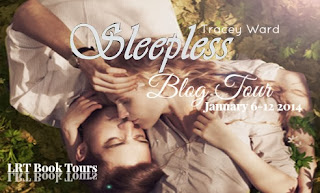 This is the first book in her New Adult paranormal Bird of Stone series… and the bad part is that the second book isn’t available yet. Yeah, it’s that kind of book where you want to plunge right on with the story. But I’m getting a little ahead of myself. First, the cover and the blurb… 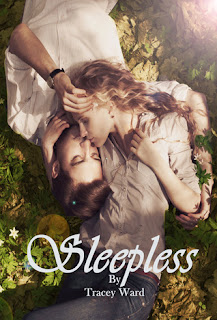 About the book (from Amazon):

My name is Alex Mills and I have a superpower.

Don't be jealous, it sucks. I can't control it. My mind is a mutinous SOB that takes over when I go to sleep. I'm just a girl trying to get some shut eye while it decides to throw a rager that can land me just about anywhere in the world.

The base of the Eiffel Tower.
The shore on the coast of Ireland.
The third baseline at Wrigley Field.

Sounds exciting and fun, right? Wrong. My not so superpower is unpredictable, uncontrollable and annoying as hell. It's also how I met Nick.

Every cloud has a silver lining. Nick is mine.

Nick is extraordinary as well. He can't feel fear. Never has, never will. It's worked out for him as a PJ in the Air Force, one of the most dangerous jobs in the military, but where it's not helpful is with his social skills. Nick is cold, distant and apathetic.

I first met him when he died and that wasn't even the weirdest moment of our relationship. Neither is this moment here and now, trapped together in an island prison on the Behring Sea. It's a long, strange story between his death and this prison. One full of sheep, docks, Jabberwocks and a very special stone. I could tell it to you if you'd like to hear it. I've got time...

In short, I loved this book. Ms. Ward took a fairly unique concept and blended it together with a little of this and a little of that to create a New Adult paranormal romance that kept me spellbound within its pages.

We meet each of the characters in quick succession, but spend most of the book with no idea of the root connection between them. When they start meeting up in the dreamscape, Nick doesn’t even believe Alex is real.

In terms of paranormal, there are no “creatures” – no vampires or angels, no mermaids or shape shifters. All of the characters are human – some just have extra, abnormal abilities.

The chapters alternate POVs between the two main characters, Alex and Nick. The author does a wonderful job differentiating their voices and giving each character a unique personality. I loved Alex’s sass and snark. Nick’s character grows and changes through the novel from someone who’s pretty heartless to a guy the reader can feel is worthy of Alex.

What Alex does isn’t quite “time travel” but close enough to that vein of story to attract readers who enjoy that genre. When she awakens in different locations, not knowing where she is, I was reminded of those scenes in THE TIME TRAVELER’S WIFE, by Audrey Niffenegger, where the MC arrives in a new locale and has to do a quick assessment of his whereabouts and danger level. Also similar is her inability to control her abilities.

With Nick’s chapters, the author does a great job with the “guy” POV and dialogue. You can tell she has experience with military protocol and speak, and the banter flows easily.

Some of the strange characters and things that happen toward the end aren’t explained fully enough, but I get the feeling they are intentional omissions by Ms. Ward, given that she’s writing a series. It reminded me of the book, I AM NUMBER FOUR, by Piticus Lore, where not everything is explained right away but unfolds over the course of the series.

While I was completely absorbed by this story, I have to say that I hated the ending. It felt slightly rushed, and then suddenly it was over. Not too satisfying, given that the second book isn’t available yet. But. I still loved the story and the characters, and feel good about recommending this to other readers who enjoy paranormal romance. 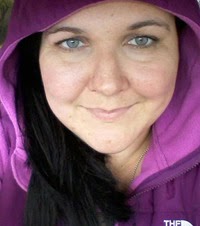 Tracey Ward was born in Eugene, Oregon and studied English Literature at the University of Oregon (Go Ducks!) It was there she discovered why Latin is a dead language and that being an English teacher was not actually what she wanted to do with her life.

Her world consists of her husband and son, and the 80-pound pitbull who thinks he's a lapdog. Find her on Facebook to learn more about Tracey.


And Wait! There's a Giveaway!

a Rafflecopter giveaway
Posted by Katie O'Sullivan at 4:00 AM