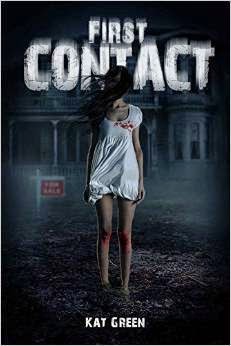 First Contact,  Book One of the Sloane Osborne Haunts for Sale series
by Kat Green
Published by Crescent Moon Press, August 2014
About the Book (from Goodreads):


Sloane Osbourne is a paranormal realtor in the business of selling haunted houses but, in truth, she's only searching for one ghost. And her time is running out. It's the 366th day after her fiance's death. Michael used to like putting things off for "a year and a day"-so tonight's the night. Sloane will do anything to make contact with him before the clock strikes midnight. When she gets a call to check out a home in Waukesha, Wisconsin, it's the last place she thinks Michael would contact her. Sloane is dead wrong. Michael appears...and tells her to get out of the house. Immediately.

MY TAKE:
In this debut paranormal mystery, Kat Green gives us an appealing but flawed heroine with a unique profession - she's a realtor who specializes in haunted houses. What a cool premise!

Sloane Osborne lost her fiancé in a car accident a year before the story opens. A year and a day, to be precise, as that specific timing was significant in their relationship. As a part time ghost hunter, Sloane figures Michael will finally make contact with her on the year plus a day anniversary of his death, and needs a haunted house to make contact with him. She flies to Wisconsin to certify and broker a haunted sale, and gets more than she bargained for.

Michael makes contact - but so do all the ghosts of the girls who mysteriously disappeared and died in this house, except there's no record or evidence of any of it. Sloane calls her old ghost hunting partner, and Michael's best friend, who also happens to work for the FBI. Jonah flies out to help her, and protect her from her insatiable curiosity, but can he keep her safe?

The ghosts are creepy, the bad guys ooze with slimy evilness, and the haunted house scenes had me both riveted and repulsed. Green does an excellent job with both her villains and the creepy factor of the restless spirits. I enjoyed the main character's voice and spunk, even as I got annoyed by some of her dumb choices. When someone tells you not to go into that haunted house alone, listen to him! Horror movie cliché, but oh so true!

While I really liked the premise and the story, I felt confused by some of the editorial choices. The back story was woven into the novel in sometimes confusing flashbacks, and at other times it felt like key bits of information might have ended up on the cutting room floor. There are several wrong word choices and misspellings that should have been caught before publication as they marred otherwise riveting scenes. The prior relationship between Sloane and Jonah wasn't adequately explored and Sloane is just a little too fond of using metaphors.

All in all, I enjoyed this book as a fast-paced, engaging thrill ride. I look forward to the next book in the series, and hope the editorial issues will be overcome by then.

Buy the ebook on Amazon HERE