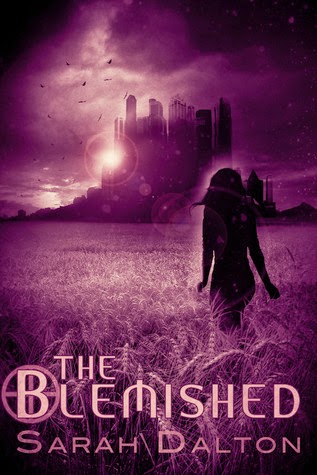 The Blemished, by Sarah Dalton
Published 2012


A beautiful world comes at a price...

In a world filled with stunning clones Mina Hart is Blemished. Her genes are worthless and that takes away her rights: her right to an Education, her right to a normal life and her right to have a child.

Mina keeps a dangerous secret which she never thought she could share until she meets Angela on her first day at St Jude's School. But their friendship is soon complicated by Angela’s adoptive brother Daniel. Mina finds herself drawn to his mysterious powers and impulsive nature. Then there is the gorgeous clone Sebastian who Mina is forbidden from even speaking to…

The Blemished is a frightening take on a fractured future where the Genetic Enhancement Ministry have taken control of Britain. It will take you on a ride filled with adventure, romance and rebellion.


MY TAKE:
I'm not sure how I feel about this book. It has so much potential to the storyline, and the situations and dilemmas facing the characters are interesting....but something is missing.

It's all first person POV from the main character, a 15-year-old "blemished" girl named Mina Hart who has some interesting powers. The dystopian future world is set in the English countryside, after the government has been overthrown by a genetic corporation that promises "perfect" children. No one is allowed to give birth naturally anymore, and all the "natural" people are labeled "blemished" and relegated to serving positions and ghettos. Blemished girls are sterilized when they turn 16.

There are resistance fighters trying to retake the government, but the lower classes are afraid to fight back. The corporation controls everything. Mina's mother left years before to join the resistance, and now Mina and her new friends need to flee before anyone learns of her particular genetic mutation and the kinetic power of her mind.

Like I said, all cool concepts, but the execution is missing something. The characters alternate between acting too young and too old for their given ages. Some of the interactions between classes are not believable.The subjugation of the majority isn't well explained nor is the timeline well defined. Maybe the answers lie in the next book of the series? I'm not sure, but am disappointed with so many loose ends.

This book was featured as a free read on Book Bub, and I see it hit #2 in Amazon's dystopian YA Kindle books and hope this self-published author the best of luck turning this success into something sustainable. I know she has more books in this series but I don't think I will be continuing on this author's journey.
Posted by Katie O'Sullivan at 5:00 AM

Email ThisBlogThis!Share to TwitterShare to FacebookShare to Pinterest
Labels: #dystopian, #Review, #YA, dystopian YA, Sarah Dalton, The Blemished