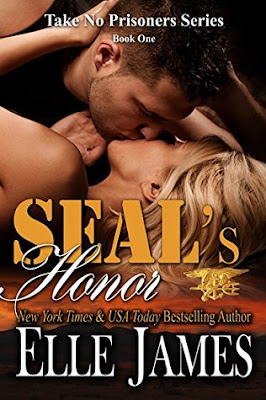 
SEAL Reed Tucker doesn’t believe in commitment, until he tangles the sheets with one hot pilot, Delaney O’Connell. His phobia against commitment is challenged when his best friend asks Delaney to marry him first.

As a helicopter pilot for the 160th Night Stalkers, Delaney knows the risks of loving a SEAL. When her lover's friend loses an arm in battle, she can’t refuse his marriage proposal when he's already lost so much. In love with one man, pledged to marry another, she’s torn.

Tuck and Delaney must come to grips with the happiness they owe themselves and the happiness of their friend who has lost so much.

Am I choosing all my books by their covers lately? Gah, it certainly feels like it. Here's another one that I have to admit I LOVE the cover art, although I was really glad I was reading it on my iPad on the airplane, because the snarky guy sitting next to me probably would've had a few things to say about the steamy scene on this cover, lol. And...on to the story.

She's a tough as nails Army helicopter pilot who lost her former fiancé to an RPGS. He's a love 'em and leave 'em Navy SEAL, training for black op missions against Taliban insurgents. Neither is looking for a relationship or commitment, but the chemistry between them is undeniable. When they both get deployed on the same mission, the desert heat isn't the only thing sizzling.

According to her author bio, Elle James is herself former active duty military, and writes with confidence and intimate knowledge of equipment, training, and operations. She describes life on base in Virginia and at forward locations in the Middle East with enough detail to make the reader feel the dust of the desert and the heat between the sheets. She alternates third  person POV between the two main characters, Delaney and Tuck, giving us insight into both of their reasoning, their frustrations, and the longing and love for each other. A great read, and a great balance between military action and complicated emotions. Totally recommend for those who like their heroes and love stories with a big rush of adrenaline mixed in.

This says it's a series, but I don't know how the author would continue anywhere with these characters. Maybe there are other SEALs on Team 10 who need their love stories told, but this one was wrapped up with a pretty bow of HEA (just how I like it!)