Today I'm excited to have fellow author Lida Sideris as my guest. She has a new book and a new series out from The Wild Rose Press (which is where I met Lida!) 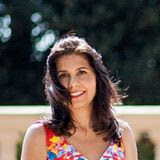 Welcome, Lida! Tell us a little bit about yourself. What kind of books do you like to read and write?

Like my heroine, Corrie Locke, I worked as an entertainment lawyer for a film studio. Unlike my heroine, I wasn’t blackmailed into investigating the suspicious death of a co-worker. I live in the northern tip of Southern California with my family, our rescue shepherds and a flock of uppity chickens. I like to read a variety of books, especially those filled with words that turn into sentences that turn into stories…preferably with happy endings. For now, I’m writing a light-hearted mystery series.

Those wonderful, surprising occasions when a scene is written that seems to work well. Those are red letter days and I’m grateful when that happens.

I sit behind the keyboard and go for it. I once did a free flow character sketch and was astonished how much I learned about each one by just letting it flow. Like Raymond Chandler once said, “I’m the kind of writer who can’t plan anything, but makes it up as he goes along and then tries to make sense out of it.” That’s me.

How about an invisibility cloak? Does that count?  That would come in quite handy as a writer because one could stare and listen and take notes without getting busted.

Tell us about your new release, Murder and Other Unnatural Disasters

Newly minted lawyer, Corrie Locke, lands a dream job in a movie studio only to be blackmailed into investigating a suspicious death. Luckily, she’s the daughter of a late, great private eye and she’s inherited his love of sleuthing…and illegal weaponry. It doesn’t help matters that her gene for caution is a recessive one. Or that her not-quite-a-boyfriend is a whiz and cooking and cleaning, but gets wobbly knees at the sight of blood.

Corrie probes deeper and finds herself in the center of a murder case. Sucked into a vortex of unwanted suitors, well-heeled suspects and colleagues fixed on sabotaging her career, Corrie will have to up her game…or die trying.

Okay, you’re casting the movie version of your novel – who would you choose for the main characters? We’re talking dream cast.

Working in Southern California means that it’s probable one will casually run into actors. I had the pleasure of meeting Sarah Shahi (of “Person of Interest”). I thought she would be perfect for the heroine. She’s lovely, tough and smart. I’ve also had the pleasure of meeting Zachary Levi (of “Chuck”) and he’s the perfect love interest. Handsome, kindly and appeared like he could handle matters as needed. J 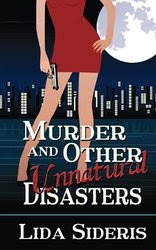 Thank you for asking, Katie! Murder and Other Unnatural Disasters may be found at all the usual places including:

And the best place to find me online is: www.LidaSideris.com

Thanks very much for hosting me, Katie!