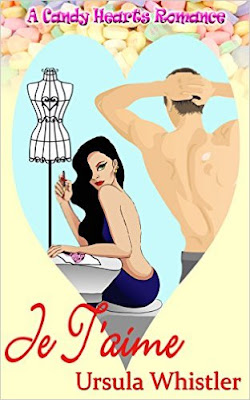 
Looking for inspiration, designer Genevieve Hoffman agrees to an apartment swap and heads to the south of France. But when the apartment owner's brother returns from deployment, she finds herself  with a man who inspires fantasies rather than fashion.

Etienne Gagnon barely made it out of Syria alive during his last special forces assignment. All he wants is a little R&R in the apartment he shares with his sister. But the woman making breakfast in his kitchen isn't his sister. He might not understand a word coming out of her mouth but he has no problem reading body language and likes what she's saying just fine.

This was such a wonderful Valentine story of romance set in France, with the language barrier playing a role. I loved the way the pair learned to communicate, and how without the ease of words, each learned to study the other's expressions and movements more closely to determine feeling, meaning and emotion. The author does a great job of showing the reader all the little details of non-verbal communication that come into play when words don't work. For a writer, it's also a great example of showing rather than telling, since dialogue didn't play a starring role.

Genevieve is an aspiring clothing designer who traded her New Orleans apartment with Frenchwoman Brigitte, for a chance to soak up a new country and new ideas to influence her designs. Etienne shares the apartment with his sister, but had no idea Brigitte traded places with this beautiful American. Home between assignments, he finds himself drawn to the shy woman and determined to communicate his interest.

The only less-than-believable part was that Genevieve both grew up in New Orleans and traveled to France without knowing much French. If I was going to spend a month in a foreign country, I'd learn as much of the language as possible.

Other than that, loved the characters, the pacing, the story, and the slowly built trust and warm relationship between the main characters. 5 candy hearts for this wonderfully told tale.

Now that she’s moved to Florida, she’s writing and publishing with The Wild Rose Press as she adjusts to beach life and caring for her ailing mother. You won’t hear much about her mother unless you follow her on Facebook or Twitter, but at her website, she writes the stories behind the stories and other snapshots of her life.