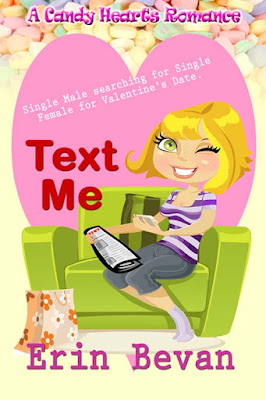 
When Erika’s ex becomes her boss less than a year after dumping her by text, she gets desperate to find a date to the corporate Valentine’s dance so he doesn’t suspect she still has feelings for him. Though not a fan of texting for the obvious reason, she doesn’t have much choice but to tap the keypad in order to gain the attention of the only viable candidate from the classified ads.

Grayson made the mistake of listening to his brother a year ago and has regretted what he did to Erika ever since. But his brother’s next suggestion just might be his salvation when he takes out an ad for a Valentine’s date…and Erika answers.

Using a pseudo name and keeping contact to text messages only, Grayson’s plans to make Erika fall back in love with him appears to be working…until the date of the dance draws near, and she pushes a meeting—face to face.

She sank deeper into the couch. What was she going to do? She couldn’t show up alone to the company dance. Not with the chance of Grayson being there. No way.

“Maybe go to another speed dating session?” She grabbed a tissue off the coffee table and wiped the excess slime from her fingers.

“My hairdresser’s single. You want me to ask him?”

“Your hairdresser’s gay. I don’t think he’d be interested in me.”

“Really.” Erika snorted. “Have you not seen the picture of him and his ex-partner at his station?”

“That was his partner?” Her friend’s mouth gapped open. “I thought it was his brother.”

She shook her head. Her friend was one of the smartest people she knew, but common sense eluded the girl.

Megan popped more hearts in her mouth. “That explains so much now,” she mumbled around the candy. “No wonder my hair always looks good.”

“Yes, it does.” Erika sipped her wine.

Her friend swallowed. “Well, I’m sorry, honey. I don’t know any single guys. If I did, I’d try to date them myself.”

“That’s okay.” She sighed and slumped back onto the sofa.

“I don’t know. Why are you asking?” She narrowed her gaze. “You want to date him?”
“No.” Her friend said “no” as if it was the most obvious answer in the world.
“I’m thinking about you. You wouldn’t go back out with Grayson again, would you? Please say no.” Megan’s shoulders sagged.

Go back out with Grayson. She never thought she’d be given another chance. Would she go back out with him after the way he treated her? Of course not. She deserved better, despite how wonderful he had been.

“I don’t think so. He really hurt me. I can’t give him that privilege again.”

“Good for you.” Her roommate perked up and patted her on the back. “Stay strong. You’ll find someone.”

“You’re right. I’m going to have a date for that corporate Valentine’s dance, even if I have to search the classifieds.”

“Surely, it won’t come to that.” Megan held up her glass for a toast.

Erika clinked hers with her friend’s. “Yeah, surely.”

Her roommate sat her glass down on the table and reached for more hearts.

“I love reading the little sayings.” Megan passed her a heart and tossed her dark hair behind her shoulder. “What’s yours say?”

She flipped over the candy to see the phrase. Bright pink letters stared back at her. Oh, you can’t be serious. “‘Text me’. Seriously?”

“You would find that funny.” Erika popped the heart in her mouth and obliterated the little saying she had grown to hate so much.

My Take:
Erica Lyons hates texting. Her last boyfriend broke up with her via text message, and now she finds out he's going to be her new boss! With Valentines Day around the corner, she turns to the dating classifieds to show him she's over him, even if she really isn't. The irony is her pretend boyfriend is all about texting.

This is a sweet, cute chic-lit kind of story, where the main character is so bad at lying you can't help but laugh at her antics. This well written but fast read is a nice piece of Valentine brain candy and a fun illustration of how ditzy love makes us all. 4.5 sweet candy hearts for this sweet romance!

Erin Bevan is a wife and mother of three. An avid reader, one day she decided to try her luck in writing stories of her own, and the idea paid off. She spends her days deep in the heart of Texas, fighting mosquitoes, cleaning dirty faces, and writing when the kids nap. If it's a really good day, she even finds time to brush her hair.