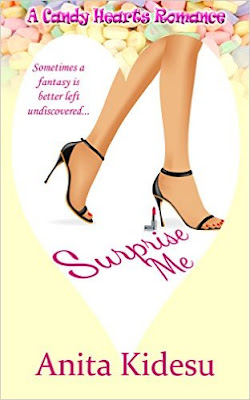 Josie and Carson Sandberg are on the cusp of being empty-nesters. With a cross-country move and Carson's busy work schedule, there hasn't been much time to connect. When gifted with a romantic getaway and challenge that says "Surprise Me," the two embark on a trip that reveals secret desires and more. But sometimes a fantasy is better left undiscovered.


“Follow you home?” he asked, calculating in his mind how long it would take before he could get her in bed.

Carson swallowed around the lump in his throat. “Parking? That’s for kids. We haven’t gone parking since…”

She chucked him under his chin. “I know. Since high school. But, surprise, I want to go parking.” She tugged on his earlobe. “Fumble in the dark. Sex in the back seat. Steam up the windows.”

Grabbing her hand, he headed for the parking lot. His cock pulsed to the beat of his pounding heart. If this was her idea of how to begin their Surprise Me week, then they were off to a good start. “Whose vehicle?”

This sizzling tale of one couple adding spice back into their marriage is fast, fun, and full of laughs. They might be married with kids, but the heat level reaches scorching as the pair surprises each other and themselves with their sexual explorations.

Anita Kidesu writes sizzling scenes with passion and feeling, taking the reader along on one misadventure after another, all of which the couple take in stride, never losing their love for one another. She also leaves open the possibility of revisiting these characters in a later story, with a few tantalizing loose ends and unfulfilled fantasies, while giving the reader a satisfying experience.

From the time she was a teenager, Anita would sneak her mother's romances and read them until all hours of the night. She never thought about creating one herself, but fell into it with a few friends. On an over-long road trip, they started talking about their favorite authors and why they like their books.

To kill time, they started making up their own characters and plot.

Now, in between being a pharmacist, taking care of her two cats, and spending time with her family and friends, she writes. Her stories are about love and romance on the edge.

Her first book, South Seas Seduction, an erotica with The Wild Rose Press, was released in March of this year.