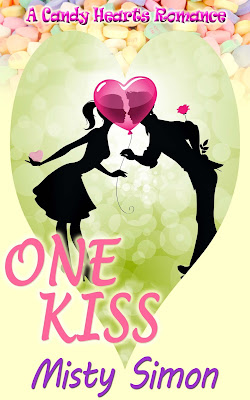 
The last place Lorena Weber wants to be on Valentine's Day is a singles party thrown by her newlywed best friend. But how can she say no? She'll give it an hour—two, tops—and then she's heading back to her normal life. But she didn't plan on seeing the one man who had turned her world on its side New Year's Eve with one kiss that opened doors she had firmly locked.

Caleb Manning got coerced into attending this ridiculous party by a co-worker. He'll stay for an hour at most and then he'll head home. That was the plan until he recognized Lorena across the room and had to see if that kiss was only New Year's Eve magic or something more.


By thirty-three he was on the verge of a divorce. The heart attack never came to pass, but the divorce had finalized just before New Year’s Eve, in time for the taxes to be screwed up.

But at least it was over. And he had celebrated New Year’s by going downtown to a local celebration where his new town actually dropped an eight-foot wrench from a crane in celebration of the New Year. The absurdity of the eight-foot wrench had distracted him from his loneliness for the moment.

But then he’d been alone while everyone else was hugging and kissing at the stroke of midnight. He’d turned and seen the woman next to him was alone, too. They’d both laughed, shrugged, and then hugged. He hadn’t meant to kiss her, but she’d looked up at him with her mismatched eyes, and he couldn’t resist. Something had flared between them, something impossible to deny. Hell, he hadn’t even tried. It had been short, as kisses went, but it had packed a wallop. He hadn’t been able to get her name, and that was his only regret.

He hadn’t moved fast enough into the room for the ball of energy that was Melanie. She must have thought he wasn’t doing enough to immerse himself in her party. “Hey, Mel.”

“Did Dillon get your coat?”

“Yep.” He tucked his hands into his pockets and hunched a little. He felt gargantuan next to her.

“Well, come in and get something to drink. Mingle. The games are going to start in a few minutes, and I want you hydrated.” She smiled, and he blew out a soft breath. He’d had no idea what to expect, and the prospect of games did not exactly inspire confidence in him. But he could always step outside into the frigid February air if he had to. At least she’d calmed down on the exclamation points that had infused her voice for the last ten days. She was like one of the perpetually happy people he wanted to throttle except they were just too cute for him to actually do anything like that.

“Are you sure I can’t help you with anything?” He wasn’t above offering himself to kitchen duty to get out of playing games with a roomful of single people. Knowing Melanie, it would probably be something like Spin the Bottle.

“No, you can’t.” She grabbed his elbow, and he let her lead him out into the living room. “Mingle. And I can find you if you try to sneak away, so don’t.”

With that, she walked away in her four-inch heels like a drill sergeant on a mission, to greet more people coming through the door.

He made no eye contact as he headed for the buffet set up in the spacious dining room. He’d promised Melanie he’d come to her party to get her off his back about finding someone, but he had not agreed to participate in party games. An hour tops and he was leaving.

A woman laughed at the front of the line with a bunch of other women. The husky sound shot like one of Cupid’s arrows down his spine and landed in his gut. Where had he heard that laugh before?

He didn’t place it for a moment. But it all zinged into place when she turned toward him and he caught a full-faced glimpse of her mismatched eyes.

My Take:
A Valentine's Day singles party thrown by newlyweds just sounds like a terrible idea. A bit of "I'm married so all my friends should get married too" going on perhaps? Lorena Weber is pretty sure it's a crazy bad idea, but has to attend anyway because her best friend is the newlywed throwing the party.  Caleb Manning also knows it's a bad idea, but he's new in town and single, with no plans or prospects. Showing up at the party will earn him brownie points at the radio station where he DJs, so he stops by for a minute...until he spots Lorena.

A quirky cute meet setup and interesting characters make this an engagingly fun Valentine's read. Told in alternating viewpoints, Lorena and Caleb each have their own emotional depths and baggage but are still willing to take a chance at the idea of love. The cast of secondary characters swirling around the party add obstacles to the pursuit and fun for the reader.

Prior to this series, I had read (and loved ) Making Room at the Inn by Misty Simons. I enjoy her storytelling style, and the way backstories emerge slowly and naturally. She kept true to her style even in the short form setting of a novella set in one night, and made every minute fun. I will totally be looking for more works by this author, and happily give this story 5 candy hearts for making me smile.

Find out more about Misty Simon on her website: www.mistysimon.com