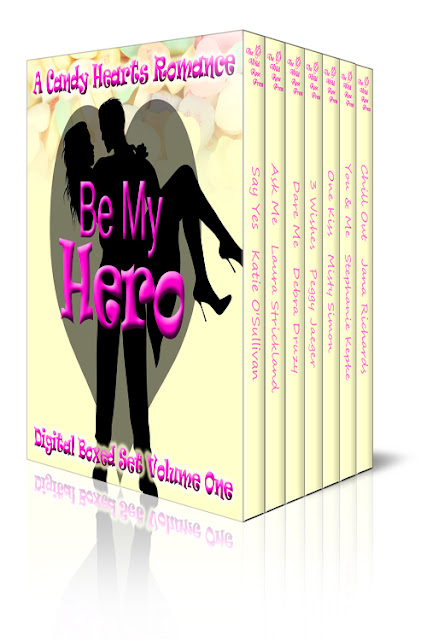 Let's here it for Valentines Day - and for my awesome publisher, The Wild Rose Press, who finally boxed up the Candy Hearts series into a few sets for readers to grab and indulge! Like a box of chocolates, only fewer calories!

I'm thrilled to be part of the BE MY HERO box set, along with a few of my other favorite candy heart stories (including THREE WISHES by Peggy Jaeger! Fangirl Squeee!)

I'm including all the blurbs for the stories here, to show you how cool this box set totally is:


Valentine’s Day is Chloe San Valentino’s birthday. Her birthday wish list for the perfect man: he’d fall in love with her in a heartbeat, he’d be someone who cares about people, and he’d have one blue eye and one green eye, just like her. So far, Chloe’s fantasy man hasn’t materialized, but this year for her big 3-0 birthday, she just might get her three wishes.


Darby Malone has trouble saying no. Hosting a children’s Valentine party at her recently renovated gallery is the last straw, and the last time she intends to say yes to anything. That is, until she meets Ben.

Ben Phillips’ life has been empty since his wife died, his paintings the only thing giving him solace. Can he convince Darby to give him a chance – and to consider him for more than just a place on her gallery walls? Will she give him a place in her heart as well?


You & Me by Stephanie Kepke


Forty-year-old Alex Spencer has given up on love. Her life revolves around her daughter, sixteen-year-old Josie, even if Josie wants nothing to do with her.
But with Valentine’s Day looming, Alex’s former high school sweetheart, Billy Leibowitz, has been invading her thoughts. Now Candy Hearts are arriving in the mail. Is Billy sending the Candy Hearts? Will this finally be her chance at happily ever after?


One Kiss by Misty Simon


The last place Lorena Weber wants to be on Valentine's Day is a singles party. She'll give it an hour —two, tops. But she didn't plan on seeing the one man who had turned her world on its side New Year's Eve.

Caleb Manning got coerced into attending this ridiculous party by a co-worker. His plan was to stay for an hour. That was until he recognized Lorena across the room and had to see if that one kiss was only New Year's Eve magic or something more.


Dare Me by Debra Druzy


For wedding stylist Misty Morningside, mixing business with pleasure is a professional no-no. That is, until she runs into wedding photographer Adam Wright at a Valentine’s Day event. Dare they set aside business for one night of pleasure?


Ask Me by Laura Strickland


Leo Rankin attends the library’s Blind Date With a Book and finds himself competing for the last remaining book. Wild child Gerri Webb is not his usual type. Yet he feels an immediate, sizzling attraction and agrees to share the book and its accompanying bag of candy hearts.

The whole idea of a Blind Date With a Book is to go off genre, so Gerri doesn’t mind when their flirty conversation suggests they unwrap each other rather than the mystery book. When a candy heart advises, “Ask Me,” she asks Leo back to her apartment. She never expects button-down Leo to hit all her buttons. Can one night spent off genre translate to real life?


Chill Out by Jana Richards


Renata Cabral needs to hide for the weekend. Her cousin’s Valentine’s Day wedding means she’ll face embarrassing questions from her large, extended family, questions she’s not ready to answer. So, she invents a work-related excuse and escapes to a friend’s lakeside cottage.

Noah Brownlee is ready to mend his broken relationship with his brother. When a friend offers the use of his lakeside cottage, Noah arrives in the middle of a blizzard with his English Mastiff, only to find the place is already occupied by a woman with big brown eyes and quirky sense of humor.

As the blizzard rages, can the candy hearts predict love?

And here's a short excerpt from my story to tease you - and hopefully entice you to click the link below.
Happy Reading!


Before he could stop to think, he bent his head and captured those soft lips with his own, gently tasting the sweetness he’d been dreaming about since their first meeting. Her whole body stiffened, like she might pull away, before she relaxed into the kiss, tentative, tasting, taking his breath away. He teased her lips with his tongue until she opened for him, giving herself more fully. He fell headlong into her softness, the rest of the world fading to nothingness.

All that existed was her mouth, this kiss, and the feel of her body molded to his.