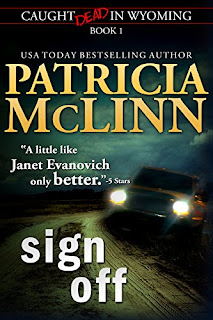 
TV journalist Elizabeth “E.M.” Danniher will tell you she committed two sins — she didn’t stay young, and she made an enemy of a powerful news executive — her ex. She used to break national news. Now her top story as the “Helping Out!” reporter at dinky KWMT-TV in Sherman, Wyoming is getting a defective toaster repaired.

Tough, funny and determined, Elizabeth wrestles with isolation, keeping a professional edge, and an evolving self-image. Is Wyoming — the land of cattle, cowboys, tumbleweeds, and fewer than six people per square mile — her new home or a road to permanent obscurity?

Soon she’s in a battle of wills with ex-football player turned journalist Mike Paycik, who might see her as a handy rung on his career ladder or a romantic partner or both. And there’s the matter of a deputy sheriff—missing or murdered? Elizabeth finds herself investigating at the insistence of a girl who’s set on proving her father’s innocence. Not that enigmatic rancher Thomas Burrell makes investigating easy for an amateur detective.

But Elizabeth won’t fade to black without a fight, no matter how final some might want to make her SIGN OFF.

This somewhat quirky romantic suspense series starts out slowly and with little to no romance in sight. The only kiss our heroine receives comes at the very end. As in, the last sentence in the book. So if you're looking for steam or sizzle with your murder, look elsewhere.

If, however, you are in search of an unconventional heroine, whose fall from grace drops her in nowhere-ville Wyoming at a television station too small to even be a blip on the Neilson ratings, you're in for something fun. Told in first person from just the heroine's POV, the reader is treated to the sometimes snarky, sometimes depressed, sometimes introspective musings of this strong, sassy woman as she does a little soul searching and a whole lot of investigative journalism, seemingly against her will (or at least her better judgement.)

Recently a big deal in television journalism, Elizabeth Margaret Danniher is stuck in Sherman, Wyoming at local affiliate KWMT to serve out the remainder of her network contract, after her ex got to stay in the big time after their divorce. The details of both the divorce and the fall from grace are left sketchy at first and only get cleared up to hazy by the end of this first book of the series, leaving lots of room to fill in the backstory as the series progresses.

The pseudo-love interest is Michael Paycik, one of her coworkers and a local boy turned NFL star, until his knees gave out early and he turned to sports broadcasting. He's learning the ropes and sees Elizabeth as a good mentor, as well as a beautiful woman. The jury is out on whether their relationship progresses passed friend status as the series continues, but the author does a great job of introducing us to them and them to each other, and getting them to the point of trust, a crucial thing to have when you're investigating local murders.

Well written, well paced and well plotted, once I got through the murky opening, the story flowed and kept me flipping pages faster than I could absorb the clues left in the minor details. Yes, I found myself going back to reread. Just warning you, don't skim or you might miss a plot point hidden in a spider web.

Totally recommend and am off to purchase the second book in the series. I wasn't going to, but then there was a teaser chapter, and we all know how much I like those. Luckily, there are already a slew of books in the series already published, which I just may have to download for my next airplane ride, but that won't be for a few months. In the meantime, happy reading!

Grab your copy on amazon.
Posted by Katie O'Sullivan at 7:12 AM