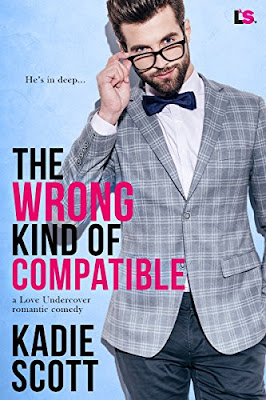 The Wrong Kind of Compatible, by Kadie Scott
Published June 2017 by LoveStruck, an imprint of Entangled Publishing (a division of Macmillan)

Data analyst Cassie Howard may be brilliant (and, okay, a little awkward), but she’s worked hard to get where she is. She definitely doesn’t need some sexy new analyst coming in and taking credit for her work. Or the inappropriate thoughts that keep popping out of her mouth she’d rather he not hear.

For undercover FBI agent Drew Kerrigan, computers have always made more sense than people, but he’d better develop some slick social skills in a hurry if he’s going to win over the too-tantalizing-for-his-sanity Cassie. Hacking their systems was easy. Now he’s just got to hack the one person in the company most likely to see through his ruse…

This fun, flirty read was on sale last week for Valentine's Day, so I scooped it up. I mean, how can you resist such a cute nerd on the cover, right? What? You'd rather go for the shirtless guy boasting a six-pack and oiled biceps? Yeah, those are good too, but there was something about this cover that grabbed my attention and whispered Buy Me. So I did.

And trust me, this was a fast, fun read. A smart, strong, quirky heroine with just a tad of insecurity and no filter between her brain and her mouth. An undercover FBI hacker more comfortable with computers than people, who buys an actual book to learn how to flirt and delivers unwitting double entendres without batting an eyelash. A situation that calls for both of their impressive hacking skills to solve... if only they were working together. Well, they kind of are. And therein lies the fun.

New-to-me author Kadie Scott does a nice job of interspersing the nerdy one liners with the socially awkward interactions to make both characters seem real. When the pair finally get comfortable with one another, the sizzle between them burns up the pages.

My only beef was the lack of fully fleshed out secondary characters. Drew has his buddy Max, who is an okay foil, but where is Cassie's support network of awesome girlfriends? She runs home a few times to her big family - and family is important - but where her judgemental mother and uber-successful brothers makes her feel inadequate (on purpose or not), wouldn't she have developed her own "family" of support outside her bio-family? Okay, maybe it's more realistic that she doesn't have that, but it would have added a nice dimension to her character, showing a little more of her hidden strength.

Or maybe I'm just comparing too heavily to Penny Reid's Knitting in the City series - and hey, it's a worthy comparison. If you like Penny Reid (one of my new uber-favorite writers!), you might give Katie Scott's books a try. Because strong, smart heroines rock. And smart, slightly nerdy heroes? They're the new Prince Charming.

As of this posting, the Kindle version is still on sale for 99 cents on Amazon. Grab a copy today!

Posted by Katie O'Sullivan at 8:06 AM