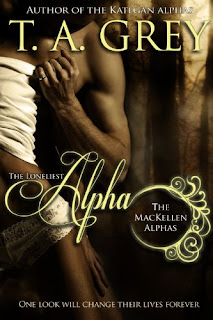 
One look will change their lives forever

Lingerie designer Alicia Clarkson just had to open her stupid mouth. After defending a fellow pack mate, Alicia's been blindfolded, tied up, and carted off to the scarred cowboy alpha of the Oregon pack--Gavin MacKellen. However, the blindfold doesn't come off as Gavin reveals he's searching for a mate and he wants to keep his face hidden. Just what happened to the mysterious alpha? He talks to her from shadowy corners and behind closed doors, but when they're near an explosive magnetism draws them together. Alicia and Gavin settle on an agreement--thirty days for them to get to know each other. But Gavin knows no good woman would ever want to look at his face after the incident he suffered. One look at Alicia sends all his plans out the window. The woman's beauty has stunned him speechless. Will she be the one to stand in the face of a monster and accept him for what he is?

Buy The Loneliest Alpha to watch "a cowboy beast" get tamed by "beauty."

First let me say I like shifter books. I find it fascinating to discover new ways in which authors create and write their urban fantasy visions and unique world building. I enjoy romance novels that include sizzling scenes between willing partners.

I need to know how the world is built. And I need a little more build up about the "willing partner" part of things before the switch is flipped to "do me."

There was a lot to like about this book, but there were also a bunch of dangling questions and abrupt changes of mood and action that left me feeling like I was playing catch up rather than enjoying the ride. I know this is the first book of this particular series, but I kept having to go back and check the cover to be sure because it felt like I missed something. Perhaps there is another series that this one follows? In any event, the author didn't do a very good job bringing readers up to speed on essential world building or the dynamics between clans.

Gavin MacKellen is the new alpha of the Oregon Lykaen pack, having won the position by challenge after the previous alpha died. Except that it's a position he never wanted, but merely stepped into the challenge to replace his youngest brother Will.  ("I volunteer as tribute...") He won the challenge, but Will hasn't forgiven him for the embarrassing moment (forget about the fact the older brother basically saved his life, since 19 year olds don't think that way.) The night after winning the challenge, someone snuck into Gavin's home and cut up his face, pouring salt on the wounds to ensure they didn't heal. (Apparently, in this shifter world, salt is like silver and inhibits the healing process. Who knew?)

Alicia Clarkson is from the Arizona pack, and the book starts with her being kidnapped and taken to Oregon against her will. The author calls this a "Beauty and the Beast" story, but she forgets that Belle went to the castle of her own free will and took her sick father's place in captivity of her own free will. At no point was she kidnapped, hogtied or duck taped. Alicia is brave and fights to free herself, but capitulates to Gavin's will far too quickly. The dynamics between the pair feel forced, and the roller coaster of trust issues made me dizzy to follow.

The sex scenes themselves sizzled off the page and were super heated, but the lead ups and follow ups were not satisfying. The hot and cold, the bold and shy, the do me/get away from me dichotomies were not logical to follow.

And then there were the secondary character introductions and POV scenes that seemed sort of like afterthoughts, only there to introduce the next characters for future stories in the series, as opposed to furthering the plot of the story being currently told.  And the submissive, doormat qualities of the Alpha's sisters? No one in an alpha family should ever be a doormat. Period.

All in all, I'm left unsatisfied by this story for so many reasons.

If you still want to read this for the hot scenes, which include explicit scenes and some mild BSDM, you can grab a copy on AMAZON.