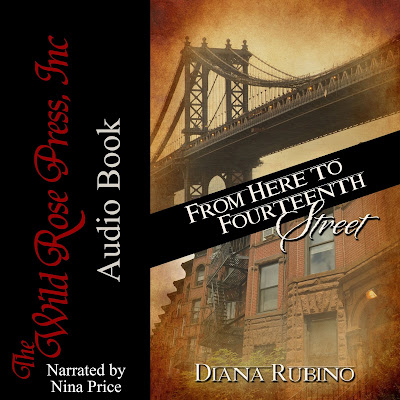 My guest today is Diana Rubino, another Cape Cod romance author who writes for The Wild Rose Press! She has a new book out as an AudioBook!

Tell us what the book is about, Diana.

It's 1894 on New York's Lower East Side. Irish cop Tom McGlory and Italian immigrant Vita Caputo fall in love despite their different upbringings. Vita goes from sweatshop laborer to respected bank clerk to reformer, helping elect a mayor to beat the Tammany machine. While Tom works undercover to help Ted Roosevelt purge police corruption, Vita's father arranges a marriage between her and a man she despises. As Vita and Tom work together against time and prejudice to clear her brother and father of a murder they didn't commit, they know their love can survive poverty, hatred, and corruption. Vita is based on my great grandmother, Josephine Calabrese, “Josie Red” who left grade school to become a self-made businesswoman and politician, wife and mother.

Wow! What an interesting premise. Can you give us some background?

New York City’s history always fascinated me—how it became the most powerful hub in the world from a sprawling wilderness in exchange for $24 with Native Americans by the Dutch in 1626.

Growing up in Jersey City, I could see the Statue of Liberty from our living room window if I leaned way over (luckily I didn’t lean too far over). As a child model, I spent many an afternoon on job interviews and modeling assignments in the city, and got hooked on Nedick’s, a fast food chain whose orange drinks were every kid’s dream. Even better than the vanilla egg creams. We never drove to the city—we either took the PATH (Port Authority Trans Hudson) train (‘the tube’ in those days) or the bus through the Lincoln Tunnel to the Port Authority Bus Terminal.

My great grandmother, Josephine Arnone, “Josie Red” to her friends, because of her abundant head of red hair, was way ahead of her time. Born in 1895 (but it could’ve been sooner, as she was known to lie about her age), she left grade school, became a successful businesswoman and a Jersey City committewoman, as well as a wife and mother of four. She owned apartment buildings, parking garages, a summer home, did a bit of Prohibition-era bootlegging, small-time loan-sharking, and paid cash for everything. When I began outlining From Here to Fourteenth Street, I modeled my heroine, Vita Caputo, after her. Although the story is set in New York the year before Grandma was born, I was able to bring Vita to life by calling on the family legends and stories, all word of mouth, for she never kept a journal.

Vita’s hero Tom McGlory isn’t based on any real person, but I did a lot of reading about Metropolitan Policemen and made sure he was the complete opposite! He’s trustworthy and would never take a bribe or graft. I always liked the name McGlory—then, years after the book first came out, I remembered that was the name of my first car mechanic—Ronnie McGlory.

I completed the book in 1995, and my then-publisher, Domhan Books, published it under the title I Love You Because. The Wild Rose Press picked it up after I gave it many revisions and overhauls. My editor Nan Swanson did a fabulous job making the prose sparkle.

When I proposed the story to Wild Rose, I wanted to change the title, since it went through so many revisions. I wanted to express Vita’s desire to escape the Lower East Side and move farther uptown. I considered Crossing 14th Street, but it sounded too much like Crossing Delancey. After a few more hits and misses, the title hit me—as all really fitting titles do.

Tell us a bit more about you, Diana!


My passion for history and travel has taken me to every locale of my stories, set in Medieval and Renaissance England, Egypt, the Mediterranean, colonial Virginia, New England, and New York. My urban fantasy romance, FAKIN’ IT, won a Top Pick award from Romantic Times. I’m a member of Romance Writers of America, the Richard III Society and the Aaron Burr Association. I live on Cape Cod with my husband Chris. In my spare time, I bicycle, golf, play my piano and devour books of any genre. Visit me at www.dianarubino.com, www.DianaRubinoAuthor.blogspot.com, https://www.facebook.com/DianaRubinoAuthor, and on Twitter @DianaLRubino.

Purchase FROM HERE TO FOURTEENTH STREET:

And because I usually feature an excerpt on Fridays... Diana has given me one, although it isn't an audio sample, just the story:

As Vita gathered her soap and towel, Madame Branchard tapped on her door. "You have a gentleman caller, Vita. A policeman."
"Tom?" His name lingered on her lips as she repeated it. She dropped her things and crossed the room.
"No, hon, not him. Another policeman. Theodore something, I think he said."
No. There can't be anything wrong. "Thanks," she whispered,  nudging Madame Branchard aside. She descended the steps, gripping the banister to support her wobbly legs. Stay calm! she warned herself. But of course it was no use; staying calm just wasn't her nature.
“Theodore something” stood before the closed parlor door. He’s a policeman? Tall and hefty, a bold pink shirt peeking out of a buttoned waistcoat and fitted jacket, he looked way out of place against the dainty patterned wallpaper.
He removed his hat. "Miss Caputo." He strained to keep his voice soft as he held out a piece of paper. “I’m police commissioner Theodore Roosevelt.”
"Yes?" Her voice shook.
"I have a summons for you, Miss Caputo." He held it out to her. But she stood rooted to that spot.
He stepped closer and she took it from him, unfolding it with icy fingers. Why would she be served with a summons? Was someone arresting her now for something she didn't do?
A shot of anger tore through her at this system, at everything she wanted to change. She flipped it open and saw the word "Summons" in fancy script at the top. Her eyes widened with each sentence as she read. “I can’t believe what I’m seeing.”
I hereby order Miss Vita Caputo to enter into holy matrimony with Mr. Thomas McGlory immediately following service of this summons.