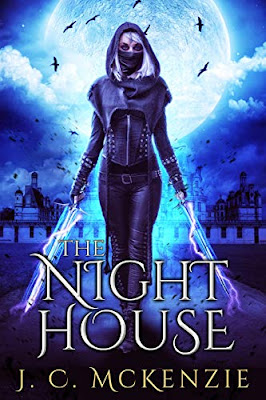 What would you pay for your freedom?

Caught by a powerful lord from the alternate realm of Arkavia, Taya’s offered the chance to avenge the dead, save her home world, and win her freedom.

Her days of stealing supplies and surviving among the remnants of Earth are over, but can she afford the price of Lord Thane’s deal?

First, I have to admit, I love everything I've ever read by J.C. McKenzie. She has a way with sassy, irreverent heroines who KICK ASS. So when I heard she had a new book coming out - a standalone, not a series - I rushed to preorder. And now it's available for purchase - so what are you waiting for?

J.C.McKenzie has a way with world-building that plucks the reader out of their reality and plops them smack dab in the middle of her story. The Night House is no exception. The story starts with her main character on holiday with her friends. As the characters joke about surviving the zombie apocolypse, a true cataclysmic event occurs, wiping out a large portion of the local population.

Alien invasion. A portal from another dimension, sending soldiers to pillage and take prisoners as slaves for their world, and simultaneously suck the life out of earth.

Our strong, sassy heroine is Taya, who watches her friends die in a magical shock wave that miraculously spares her life. She bands together with other human survivors, stealing supplies and making life difficult for the invaders. Until four months after the invasion, when she's captured by one of the Arkavian lords and given a choice: work for him or die.

Thane is the younger brother of one of the powerful Arkavian families, or Houses. Unlike others of his race (including his brother and father) he is compassionate for the plight of the realms they invade, but it doesn't stop him from his work of plundering Earth's resources.

The magic and intricate world building are densely packed into this story. In fact, I think I would have been happier if the novel had been expanded into a series, drawn out with more time and detail for every encounter, and all the time jumps added back into the mix. But as it is, I can't say that it's "missing" anything. It's a fast-paced tale that gives us all the highlights and important moments, but not too be read too fast or you'll definitely miss something important.

What you won't miss is the undeniable attraction the author paints between the main characters, Taya and Thane. Unwilling for both of them, as they are enemies. And yet there's an irresistible pull between them which makes for entertaining reading. Taya's sarcasm and quirky humor keeps things light and realistic - okay, as realistic as this magical paranormal tale can be. Which is one of the reasons I love this author. Her characters are real and down to earth, making the reader believe in the magic along with everything else.

In short: Loved this book. Wish it was a series instead of a standalone. Need more J.C. McKenzie.

Grab your copy now on AMAZON.