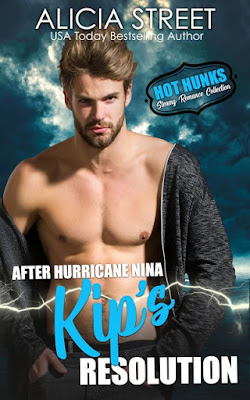 On November 30, 2016, Hurricane Nina hit Bali, Indonesia. In the aftermath of death and destruction, eight strong sexy men will realize it’s time for a change in their lives. A resolution of sorts. A contractor, personal trainer, a millionaire, a stuntman, a rock star, a thrill-seeker, an army veteran, and a trust fund prodigal will all find a way to conquer their loss and learn to love. This is Kip's story.

Resolution: To get back in the game or find a new one.

Hollywood stunt man Kip Rocklyn loves taking risks, using his skills to cheat death. After nature gives him a tragic dose of reality testing, he wonders if he’s just a kid refusing to grow up. But can he fit in a world where he doesn’t hurl his body through space or race a motorcycle at breakneck speeds? Would a woman’s love make it possible?

Mina Winthrop has always been a straight arrow, with strict parents she had never even considered disobeying. And she dates men who never veer off the narrow path. Trouble is none of them turn her on. Which is why she’s got a secret problem—she is still a virgin at twenty-seven. And she’s decided Kip Rocklyn is the perfect man to rid her of that.

Hunky Kip Rocklyn earns his living as a Hollywood stuntman - performing death defying acts is all in a days work for him. When he's on location in Bali, he befriends a teen who wants to follow in those same footsteps... but instead dies in the aftermath of Hurricane Nina. Kip is devastated with guilt, drinks to assuage the pain, and nearly gets himself killed while performing another stunt. Which all leaves him feeling vulnerable and unsure about what to do next. Has he lost his edge? Should he grow up and get a "real job" ?

Enter Mina Winthrop, who works for Kip's brother in law. Her ultra-strict parents never allowed her to stray from a narrowly defined path, which at 27 she's still walking. (And still a *gulp* virgin.) Kip's daredevil personality is the complete opposite of everything she is and every guy she's ever dated... and yet she's like a moth drawn to a flame. He's staying at his sister's home while recovering from his injuries, and the pair strike an unlikely deal. She'll give him lessons on having a "grownup" job, and he'll give her lessons in love. And relieve her of her "pesky V-card"... and yet things aren't ever as simple as that.

I really loved how the author set this in an established "world" with characters she'd already created but not introduced to each other. After reading this, I'm excited to go find the other books with the Rocklyn family and catch up on all of them - and yet, that didn't take anything away from this stand-alone story. Kip and Mina are complete opposites, but as we all know from high school chemistry, opposites most definitely attract. I loved how Mina smoothed Kip's rough edges, and wish Mina had let go and admitted she enjoyed some of Kip's edgier moves. It bothered me that she couldn't let go enough to admit to a secret thrill when riding on the back of his motorcycle. I mean, come on. There's a little bit of bad in every good little girl, no matter how much sh*t her parents put her through.

I'm totally looking forward to reading more from this author!! 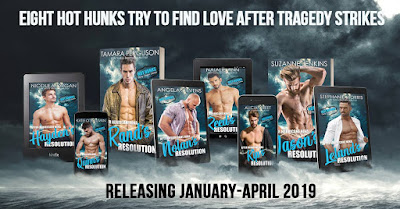