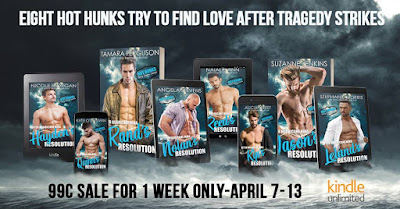 That's right - all 8 books in the series are now available - and each on sale for 99 cents!


Find them all on one convenient AMAZON page

Here's the blurb for my story in the collection:


On November 30, 2016, Hurricane Nina hit Bali, Indonesia. In the aftermath of death and destruction, eight strong sexy men will realize it’s time for a change in their lives. A resolution of sorts. A contractor, a personal trainer, a millionaire, a stuntman, a rock star, a thrill-seeker, an army veteran, and a trust fund prodigal will all find a way to conquer their loss and learn to love.


And to entice you more, here's the first chapter from QUINN'S RESOLUTION.....enjoy!

The four met on the rugby field when Chuck and Quinn were freshmen and the other two were sophomores. The band’s name, Dead Ball Line, was the rugby term for out-of-bounds. It had been a goof at first, playing Green Day and Blink 182 covers at fraternity parties, pretending at being rock stars to score chicks. It wasn’t until they moved to London after Grubber’s graduation that they started adding Quinn’s original songs into the mix.
And now here they were on a tropical island, surrounded by gorgeous women in bikinis, shooting a music video for the album they’d finished recording last month. Quinn wrote each and every song on the album, relying on Grubber to flesh out the tunes and John to create the fast beat their fans craved.
If the success of the first single, No More Tomorrows, was any indication, the album would do well.
They’d finally made it.
Life was good.

After saying hasty goodbyes to his friends, and a very disappointed blonde in a teeny silver bikini, Quinn left the beach and hightailed it to the local airport. On the flight out of Jakarta, he overheard two of the flight attendants talking about harsh weather moving into the region over the next few days. Between his leaving and the rain headed toward the island, it was a good thing they’d finished shooting most of the music video. The additional concert footage would have to wait.
By the time Quinn landed in Boston, there were reports of a massive hurricane wreaking havoc along the coast of northern Australia, moving toward Indonesia. The international reporters called it a “tropical cyclone” which was apparently what they called hurricanes in Australia. Who knew?
He texted Chuck and Grubber, saying he’d made it to Boston safe, and apologized again for leaving them. The replies came fairly quickly, considering the distance. More girls for us, Chuck texted back. Grubber’s reply was longer. The locals say they never have problems with hurricanes. Just an excuse to party harder. Don’t worry about us.
His thoughts so laser-focused on his own family tragedy, it hadn’t occurred to Quinn to worry about the rest of the band. Hurricanes hit Cape Cod all the time. No big deal apart from a little wind damage. A few shingles off the roof, maybe a tree knocked down. Making it an excuse for heavy drinking sounded like an awesome idea, and he felt a twinge of jealousy. Here he was back in the U.S. for a funeral, and they were partying their asses off.
Directly in the path of Hurricane Nina.

Posted by Katie O'Sullivan at 7:39 AM