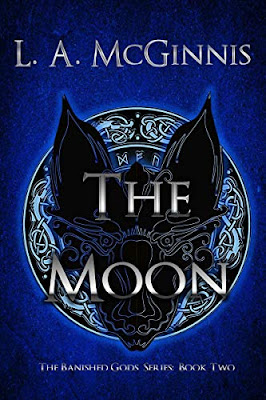 
It’s always darkest before the dawn. Or so they say. Clearly, they’ve never seen where I came from.

For four years, life has been good for Celine Barrows. But when a monster comes calling, Celine must answer. Her one chance at salvation is a stranger who makes no promises, and leads her on a journey into the very darkness she thought she had escaped. As the world shatters around her, and war looms on the horizon, Celine discovers that sometimes it takes a monster to defeat a monster.

Not at all what I expected when I started reading. As in, somehow I didn't realize it was the second book in a series and felt a bit lost in the first chapter - yet it was billed to me as a standalone, so I forged on. And am so glad I did.

If you like mythology you've got to try this book, this series, this author - especially Norse mythology, of course, but if you have affinity for monstrous mythological creatures dragged kicking and screaming into our present day world you'll love The Moon. It reminded me a little of Kevin Hearne's Iron Druid series of books, as the Norse gods play large roles in making his main character's life chaotic... Hearne doesn't paint the Norse pantheon with as sympathetic brush strokes as McGinnis uses. She's using more of a Thor and Loki from the Avengers palette, which works just fine for me.

Fenrir, or Fen, has never been a likeable character in any mythological tales. He was created to kill demons and gods alike, and help bring about the end of the world. When we meet him in Chapter One, he's still not very warm or fuzzy, but his character's deep sense of yearning tugs at something inside the reader. An anti-hero for sure, and a hunky one at that. Chapter Two is more clear cut - the heroine's place and plight more well-defined and sympathetic from the start, although it's not clear at first who her tormentor might be.

Told in he said/she said third person, with the odd chapter from the points of view of other characters, the narrative barrels along at breakneck speed. And I know I said I had trouble getting into the story at first, but once I caught on and got hooked, man was I hooked. It's not a short or fast read, with dense beautiful lyrical language that makes you take a breath and re-read paragraphs at times because the author puts together such beautiful and haunting images.

Totally loved and totally recommend. Grab a copy on AMAZON and start reading!