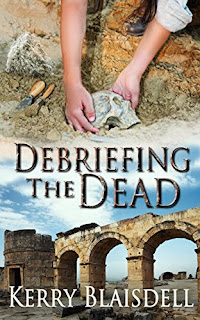 Debriefing the Dead (The Dead series, Book One) by Kerry Blaisdell
Published May 2018 by The Wild Rose Press


The only thing Hyacinth wants is her life back. Literally. She and her sister were murdered by Demons, leaving her young nephew, Geordi, to his father’s family in the brutal Sicilian Mob. Then Archangel Michael offers her a deal: recapture a powerful rock the Demons stole, and she can live long enough to find Geordi a safe home. Refuse, and she’ll continue up (or down) to the Afterlife.

So, slightly more alive than dead, she heads for Turkey and the Demons, taking Geordi, her mysterious neighbor Jason, and a sexy dead guy only she can see with her. But the hardest part won’t be battling Demons, meeting Satan, or dodging Middle Eastern customs—it will be later, when Geordi is settled, and Michael rips her away again. How can she abandon her nephew? Or can she outwit the Angel of Death himself, and stay with Geordi forever?

Debriefing the Dead is a first-person narrative adventure full of unexpected turns. Reading it felt like going on a rollercoaster ride through a pitch black tunnel... never knowing where it might go next. Reminiscent of a Dan Brown archeological mystery, yet with a paranormal otherworldly twist that forces you to suspend disbelief in order to follow along on the adventure.

This story takes "angels" and "demons" to a different level. A very complicated level.

Our narrator is sort of an anti-hero, self aware enough to know she's a criminal, but with a good heart and good intentions towards those she cares about. She deals in antiquities, and when some extra shady characters come into her shop, she's torn whether to deal with them but ultimately agrees because she needs the money to help protect her sister and nephew.

Things I liked:
* Snarky, self-deprecating heroine who knows who she is and what her goals are.
* Action-packed storyline, barreling from one crisis to the next.
* Vivid descriptions of both people and scenery, making it easy to see in my mind, like a movie.
* Adorable 7-year old at center of action who acts like a kid.

Things that Bugged Me:
* The backstory and setup seem lengthy and convoluted at times.
* European setting and characters add French dialogue and phrases that are not always translated for the reader (although i think all the important stuff in in English.)
* Love triangle... Where neither guy is an obvious - or healthy - choice for the heroine to make...
* Discovering "superpowers" just in the nick of time. More than once.
* The cover art. Okay, I know that's petty of me, but the cover gives you NO CLUE as to what the book is about.

Okay, with all that said, I still enjoyed reading this book. The author paints a beautiful canvas with her words, and has a unique and interesting storyline running throughout. As a reader, I felt like maybe she tried to fit too much into one book. It feels like she's setting up a series (okay, so she's totally setting up a series, and the second book comes out in May) but with both too much and too little information.... all at the same time.

If you like mystery/adventure tales and can appreciate a new take on a paranormal demons vs. heaven with a side of grim reaper and ghost whisperer, give this book a shot.

I received an ARC of this novel via Booksprout in exchange for my honest review.

You can grab a copy on Amazon and check it out for yourself.