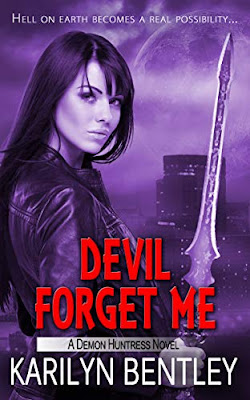 Devil Forget Me, Book 5 in the Demon Huntress series, by Karilyn Bentley
Published April 1, 2019 by The Wild Rose Press

What appears to be a simple crime, unmasks a chilling deception...

Gin Crawford, the world's newest demon huntress, kills two minions who are breaking into a financial adviser's office. But what she thinks of as another night in the life of a demon huntress leads to a cover-up of epic proportions. A demon haunts her employer, the Agency, and only she can stop it.

Aidan Smythe, her guardian mage and lover, along with her brother T, and the healer Eloise, join her search in discovering the demon's identity. A search thwarted by a powerful spell.

Breaking the spell requires her to join forces with Zagan, the demon of deceit, the demon who marked her as his. But working together comes with a price. One Gin is not sure she can pay.

Let me tell you first that I love this series, having read and reviewed them all. And when I heard it would be a 5-book series, I worried a little about how the author would tie it all together at the end. (I also worried what I'd do with no more Gin Crawford books to look forward to... but that's my problem.)

My worries proved groundless. At least the ones about the author gathering all the loose strings and tying them together.

Karilyn Bentley writes with an engaging, action-packed style that brings her heroine and the demons she chases to life in vibrant color.  Gin Crawford is a down-to-earth, flawed character with enough sass and grit to kick demon ass and still be worried about everyday concerns and be insecure about where her relationship with her boyfriend Smythe is going. She's a complex, complicated character and I love her first person narration filled with snarky asides.

Now, the problem is that if you haven't read the first four books, you absolutely CAN NOT start with this one. This is a series that builds over time, and each book is crucial to your understanding of the characters, their complex relationships with one another, and the overarching plot line of the infighting amongst the demons clawing their way through one another to take over Hell. This story doesn't make sense to the reader unless you are already familiar with everything that's already happened to the characters. NOT a standalone.

So if you aren't up to speed with this series, stop reading this review and go find Book One right now. It's titled DEMON LORE and available on AMAZON. If you like first person paranormal and snarky demon hunting heroines, dig into this series from the beginning.

If you've already read the first four books, here's the rest of my review of the final book in the series, without giving away too much.

Gin and Smythe grow closer in this book (finally!) and share secrets with one another (again, Finally!) Her brother T (short for Tonic, of course) and Eloise also grow closer, and we learn some of Eloise's secrets as well. The four are on the verge of figuring out the mystery plaguing the Agency, but Gin has to decide if she's going to accept Zagan's help once again... because she knows Smythe won't like that and she's still feeling a little insecure in their relationship.

Hmmm, this is harder than I thought to not give stuff away.

Maybe I won't try. Suffice it to say, the story flows pretty organically to its conclusion, and Gin get the happy ending she deserves. What that is, I can't tell you but I will say I was satisfied with the conclusion of the series. And if you're a Demon Huntress fan, I'm guessing you'll enjoy this as well.

Grab your copy of Book Five on AMAZON and get ready to stay up way too late.