Monday Book Review: Aristotle and Dante Discover the Secrets of the Universe, by Benjamin Alire Saenz 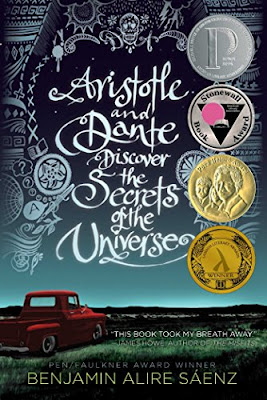 Aristotle and Dante Discover the Secrets of the Universe, by Benjamin Alire Saenz
Published by Simon and Schuster, February 2012

This Printz Honor Book is a “tender, honest exploration of identity” (Publishers Weekly) that distills lyrical truths about family and friendship.

Aristotle is an angry teen with a brother in prison. Dante is a know-it-all who has an unusual way of looking at the world. When the two meet at the swimming pool, they seem to have nothing in common. But as the loners start spending time together, they discover that they share a special friendship—the kind that changes lives and lasts a lifetime. And it is through this friendship that Ari and Dante will learn the most important truths about themselves and the kind of people they want to be.

This book was on my recommendations list last week, and I took my own recommendation. And decided this book totally deserved all the accolades and awards it won.

This is a coming of age book told all in first person with a lot of inner monologuing from Aristotle's point of view. We first meet Ari at the beginning of the summer he's 15, and the book continues through until he's almost 17. He's Mexican American, living in New Mexico. His mom is a school teacher and his dad is a retired Vietnam vet who's now a postman, and he struggles with his relationship with each of them, especially his father's reticence.

He has two older sisters and a brother who were born before his father went off to war, and he was born after his dad returned. His sisters are married with their own households, but his older brother is in jail and no one ever speaks of him, which haunts Ari because he was 4 when it happened so he doesn't remember or understand but no one will talk to him about it. He's awkward and lonely and angry and not sure how he fits into the world or even into his own body.

He meets Dante at the community pool at the start of summer vacation, when Dante offers to teach him how to swim. Dante seems to be everything Ari isn't - he's talkative and happy and seems so sure of who he is and his place in the world that Ari is fascinated by him, by the light he sees within the other boy. The unlikely pair become friends, but it's all shared through Ari's eyes as he struggles to work things out, to figure out who he is and figure out the secrets of the universe. (thus the title)

The author truly sounds like a 15 year old boy, on the verge of manhood but not quite ready to give up being a boy, scared to find out what's next. Achingly honest but also lyrical in parts. Dante introduces Ari to poetry and his thoughts become more sensitive and flowery at times, incorporating his new experiences into the person he is becoming. Some of the chapters are super short, other longer, all in all very satisfying.

Totally recommend and I'd give it more than 5 stars if I could.

Posted by Katie O'Sullivan at 9:24 AM