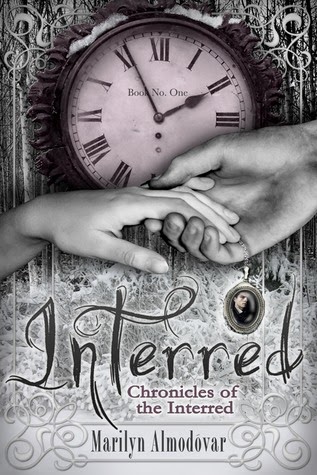 Time has never been an issue for Baxter Jacobs, but then she never knew she had the ability to Bend it.

As her sixteenth birthday approaches, Baxter inherits a pendant that will change her life. Connected to the pendant is a dark and mysterious young man named Declan Ashdown. Trapped in a Time loop for the past 122 years, Declan needs Baxter’s help to escape. The only problem is, she has no idea how to do it.

To acquire the power she needs to free him, she’ll become one of the Interred, those whose Magical abilities emerge as they come of age. When she does, she’ll discover that Declan isn’t the only one interested in the fact that she’s a Time Bender.

As the Interment arrives, Baxter knows this will be no Sweet Sixteen. A vengeful relative and ruthless Council are determined to control her. Declan’s powerful and charming descendant, Jack Ashdown, claims he can save her. She’ll soon have to decide who she can trust, and how to master her new abilities before Time runs out.

As Baxter Jacobs get close to her 16th birthday, strange things start happening. Her mother's cousin visits from England with news of her grandmother's passing, and news of inheritance.  As if meeting a relative she's never heard of wasn't strange enough, Baxter also sees a boy whom no one else can see, a boy she's seen once before, at her grandfather’s funeral.

The boy turns out to be a magical spirit, trapped in a loophole of time and tied to her family. Baxter is both drawn to him and repulsed by him, not sure of his true intentions.

Her family travels to England, where Baxter delves deeper into this world her mother once belonged to, and finds out her family legacy is a magical bloodline, part of an ancient race of beings who live alongside normal humans but wield different forms of magic. A coming of age ceremony will determine who wields certain gifts, and who is strong enough to survive the transition to adulthood.

If you enjoy magical time travel in an older YA story, this book makes for fun, fast reading. (I’m a huge time travel fan, so this was right up my alley.) It's not always clear who is good and who is evil, but you keep rooting for the heroine to figure out the twists before it’s too late.

The first of a series, the second book FISSURE came out earlier this year, so even though the book ends with unresolved cliffhangers, book two is available. And already in my beach bag.