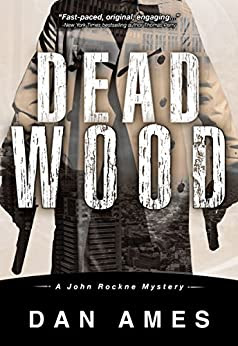 An Ex-Cop Who Lost Everything. A Killer Who Will Stop At Nothing.
By the author of the Jack Reacher Cases, set in the Reacher universe by permission of Lee Child.

In the exclusive enclave of Grosse Pointe, Michigan, a woman who builds custom guitars is murdered. A disgraced ex-cop turned private investigator is hired by the dead woman's father and immediately becomes the target of a violent ex-convict. An enigmatic music star performs damage control on her links to the dead woman. And a professional killer who idolizes Keith Richards is brought into town by a mysterious employer.

Dead Wood is what great mysteries are all about: love, hate, faith and vengeance, all wrapped up in an explosive story that simply refuses to let up.

I admit to buying this book through BookBub without reading the full blurb. the teaser sounded good so boom, into my reading queue. But it's not my typical read, and it's not really the sort of cover I gravitate toward, so it sat unread for a while in my online library. I pulled it up to try, thinking I'd at least clear it off my device. Nope. Read it like it was water to a person in the desert, and went on to read the next two books in the series.

Snarky, self-deprecating, and fast with the quippy one-liners, John Rockne is the disgruntled ex-cop turned PI. More like Stephanie Plum or Kinsie Millhone than Sam Spade, Rockne grabs the reader from the first few pages and drags them along on his wild ride. Told in first person POV, the book starts with young rookie-cop Rockne, cocky and self-assured, making that mistake that cost him his badge, his fiance, and the life he'd planned out.

The next time we see the now ex-cop, it's years later. He's a different man except for the snark. His sister is the chief of police and he hasn't left the same Grosse Pointe enclave where he lived before and during his screw-up. he runs a successful PI business, is married to a strong woman with a temper and opinions, and has two little girls whom he dotes on. Not the glamorous life he'd envisioned as a younger man, but comfortable. Happy.

The case that comes his way seems straight-forward at first but brings him back to the beginning, to the night his life made the left turn off the fast lane. I found it interesting to read the introspection from a male character - and a male author's - point of view. What gets focused on. What doesn't. Rockne has the same healthy amount of self doubt as Sue Grafton infuses her character with, and the same thoughtless hubris that Evonavich's Stephanie Plum often displays. His character is fascinating reading to me because it wasn't as predictable as I first expected, and I couldn't unravel the mystery any faster than Rockne could as he plods through the confusion of facts and profusion of dead ends.

Entertaining, engrossing, gripping and gritty, the Grosse Pointe Pulp series is totally worth the time spent reading. 5 bright stars for this new-to-me author. Looking forward to reading more from him!

Grab a copy on AMAZON and try it for yourself...

...or if it sounds good to you, save money and grab the first 3 books in the set on AMAZON

Posted by Katie O'Sullivan at 6:55 AM