Monday Book Review: Home In Your Arms, by Charlotte O'Shay 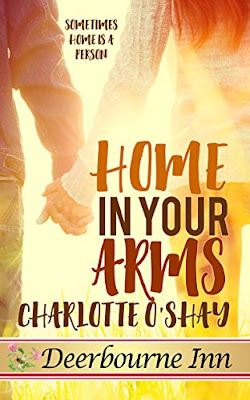 After her sweetheart Joe dies in a road accident, twenty-four hours after he returns from Army service, grieving Karla Payne slams the door on love. Five years later, Karla's tavern business is booming, and she owns her home, but she knows forever love has no part in her future.

Headed to interview for his first civilian job, retired career Army 1st Sgt. Zane Blackthorne can't resist visiting his late buddy's beloved Vermont hometown. He also can't resist looking up Joe's sweetheart, Karla, who is an alluring mix of brains, beauty, and bravery.
Loyalty to his brother-in-arms demands Zane fight his attraction to Karla. Besides, even if Karla wants him, she'll never love him.

Can Zane say goodbye to the woman he has no right to call his own?

Even if his only true home is in her arms?

I love second chance romance! And I love Vermont settings, so the Deerbourne Inn series has a lot going for it, especially this newest installment in the series. Published by the Wild Rose Press, each Deerbourne Inn book is written by a different author and different romance genres, but I love a story of second chances.

Charlotte O'Shay writes believeable, down-to-earth characters with such heart and emotion, you can't help but root for their Happily Ever Afters right from the start. Home in Your Arms, however, gets off to a rockier than usual start.

Karla and Zane met only once before, at her fiance's funeral. Joe made it through an overseas deployment, only to be killed in an early morning car accident when he returned to his small Vermont hometown. Five years later, his Army buddy Zane comes to pay his respects to the town and the sweetheart he feels like he knows from so many stories and conversations. If he's honest with himself, he probably fell in love with her from the stories alone, but the reality of seeing the strong, beautiful, take-charge woman in person blows Zane away.

Karla has only ever dated or loved one man. When Joe dies, she decides fate meant her to be alone for the rest of her life, and throws her energy into work. The feelings Zane stirs in her surprise her on so many levels, but she studiously avoids labeling them since she doesn't want to betray Joe's memory. When he finally pushes to define their relationship, she completely panics.

Can she let herself love again? That's the million dollar question at the center of any good second chance story, and at the heart of the book. And the way Ms. O'Shay handles all the nuances of Karla's emotional upheaval is brilliant.

If you enjoy small town, second chance romance you've got to grab this one. It will tug your heart strings and make you smile. 5 well-deserved stars.