New YA Book Release and Review: Damned When I Didn't, by Cherie Colyer 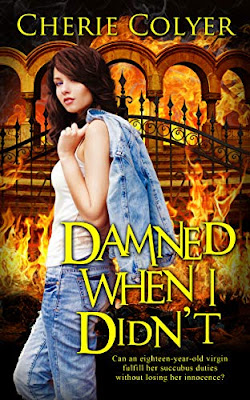 Death isn't the end for eighteen-year-old Avery Williams, and her final resting place isn't beyond the Golden Gates. No, the Queen of the Damned has plans for her and, unbeknownst to Avery, fought hard to gain possession of her soul.

As Hell's newest succubus, Avery is expected to siphon life from the living. It only takes a long, meaningful kiss, but for a virgin like Avery, kissing guys she barely knows isn't something she's comfortable doing. Avery focuses on the upside of her fate—she'll be returning home, or so she thinks. When the Queen of the Damned cuts her off from her old life, Avery is determined to find a way back to her family and friends, even if it means facing Hell's fury if she's caught.

Paranormal romance takes many forms - weres, vampires, ghosts, witches, demons - and succubi are usually one of the racier sub-genres since a succubus is really all about sex. Imagine my surprise in finding a new Young Adult story about a teenage succubus who is still - get this - a virgin.

Turns out that the job of a succubus is actually to feed on men's souls, shading them grey with a bit of sin. Acting as part of the recruiting squad for Team Hell. Except 18-year-old Avery, Hell's newest recruiter, isn't as loose with her kisses as she needs to be to get the job done. Before she died, she'd never gone further than stolen kisses - unfortunately they were with a friend's boyfriend, which caused the grey stains on her soul.

Luckily, Avery is sent to live with Cole, who is supposed to show her the ropes of her new immortal existence. The handsome hunk has been an incubus for over hundred years, having sold his soul at nineteen to save his older brother. Together with his rag tag band of human and no-so-human friends, he tries to help Avery come to grips with and adjust to her new "life" as an immortal demon. I can't go into too many actual details as the fun of this story is the twists and turns of the journey.

I've read several of Cherie Colyer's previous young adult books, including the Embrace series.Colyer does a great job with first person POV and snappy teenage dialogue. Colyer keeps the action moving right along, complete with bad decisions and close calls between Avery and the Queen of the Damned. i found the characters likeable, and kept rooting for some kind of happily ever after, even though all the best characters were already, um, damned. Buckle in for an interesting ride, for a book that seems to be the first in a new series.

5 stars, in hopes that there are more Avery books to come!