Book #Review: LEGACY OF THE BLOOD by Callie Kanno 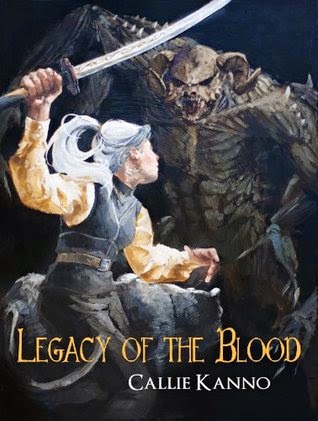 Legacy of the Blood, by Callie Kanno
Published November 2013


Book 2 of The Threshold Trilogy:
Five years have passed since Adesina began on her path to lead her people, the L’avan, back to their true purpose. Her hopes for peace and prosperity are high until her husband, L’iam, is captured by an enemy bent on ultimate control. Adesina is willing to go to the end of the earth to save her husband, but as she travels deeper into unknown worlds she discovers that there is more at stake in this journey than she ever could have imagined.

LEGACY OF THE BLOOD is the second in a high fantasy series for young adults, written by Callie Kanno. The story picks up five years after the ending of the first book, THE THRESHOLD CHILD.

I enjoyed this book, but if you haven't read the first book in the series you won't understand what's going on. I read and reviewed THE THRESHOLD CHILD in February 2013 - you can find my review on this blog by clicking HERE. This is high fantasy with a ton of world building and back story. You can't just jump into it midstream. Think of it like The Lord of the Rings trilogy. You can't just start with The Two Towers, right?

On to my review.

It's been five years since our heroine Adesina embraced her vaya, or magic. She married L'iam and now rules by his side as Queen of the L'avan people, a race of magic users. When he is kidnapped while on a diplomatic mission, she must race to save him from the Shimat, the warrior sect where Adesina was raised.

Before she can mount a rescue, Adesina's Shimat instructor appears at the L'avan village to offer his services to aid in recovering L'iam. Although wary of Kendan's intentions, Adesina agrees to allow him to help. Together with two L'avan warriors and Kendan's tracker, they begin a journey to save not only L'iam but the fate of their world.

Adesina discovers that her lifelong Shimat enemy and rival, Basha, was the one to kidnap L'iam. She also discovers along the way that Kendan still harbors complicated feelings toward Adesina, feelings she no longer reciprocates.

There are many twists and turns as the group faces one obstacle after another. Along the way they make friends and alliances with the various people they meet, Adesina's innate goodness winning over hearts and minds even as they battle for their lives. The overarching myth of the Threshold Child haunts Adesina until she figures out the meaning of the prophecy. She also needs to overcome her inner doubts and fears about the strength of her own vaya, and learn to control it before it controls her.

There is a lot of history and back story that Adesina must learn in order to prevail in her quest. The Dream sequences she embarks on with her Guardian, Ravi, get to be a little much, and I think the author could have handled the information dump a little more creatively. The Dreams themselves tend to be slightly confusing as Adesina both observes the action in the dreams from the periphery and experiences them as the main characters from the history she is observing. If head hopping or abrupt POV changes bother you, this might not be a good fit for you as a reader.

If you enjoy high fantasy and sweeping, magical quests, immerse yourself in the world of Adesina and the L'avan. Unlike the first book, which had a strong and definitive HEA, the ending to the second book is abrupt. But never fear, a third book is in the works.

Email ThisBlogThis!Share to TwitterShare to FacebookShare to Pinterest
Labels: Book review, Callie Kanno, Legacy of the Blood, The Threshold Child, YA fantasy