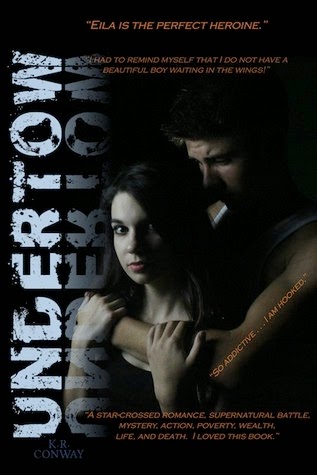 Eila Walker knows luck is not a friend, so she is downright shocked to inherit a million-dollar Cape Cod home. And yeah, her new town isn't perfect: the cheerleaders are heinous clones, the local undertow can kill ya, and her Great Grams was supposedly fried by lightning in the harbor square. Still, Eila is hopeful her luckless days are in the past...until history decides to repeat itself.

When drool-worthy Raef O'Reilly becomes her friendly, yet weirdly protective shadow, Eila thinks life is pretty darn perfect - until she is hauled beneath the waves by an unnatural undertow. Revealing coal-black eyes and iron-like strength as he rescues her, Raef can no longer hide what he is...or what she can do. Eila, last of her kind, can supposedly channel the power of human souls, while Raef is more adept at stealing them. Even worse, the legend about her ancestor isn't such a myth, since Eila's grandmother was one kick-butt warrior until her lightning-like power backfired. A power that is written all over Eila's DNA.

Determined to stay one step ahead of a dangerous clan that is hunting her, Raef, along with three unlikely allies, will do all they can to protect her. But as hidden pieces of their brutal histories unravel, Eila begins to understand just what went down in the harbor square and that she may be forced to follow in her grandmother's fearless footsteps to save those she loves.