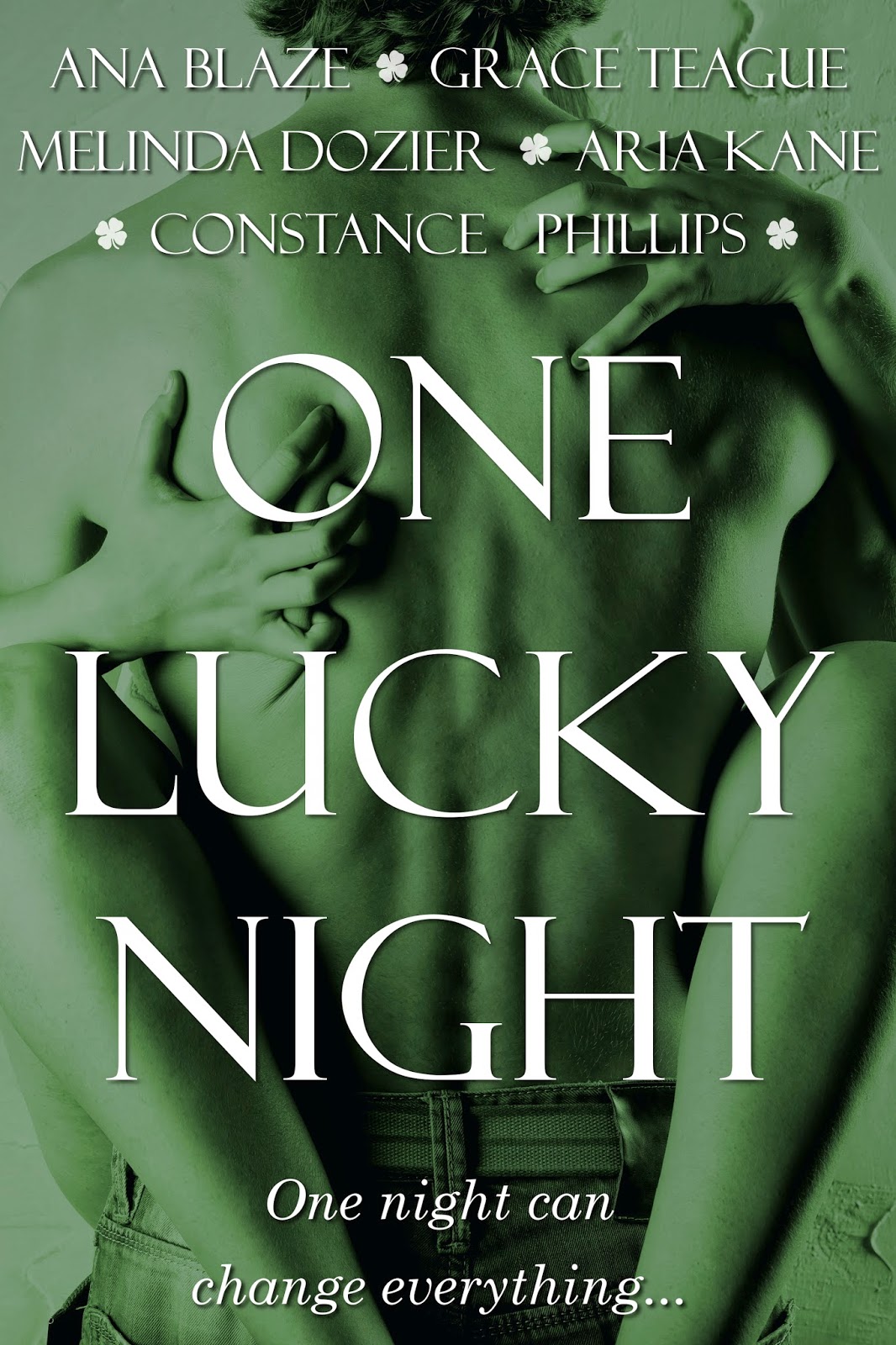 About the Book:
One night can change everything…

The crew at Boston’s Brazen Head Pub hasn’t been very lucky in love. Can a mysterious visitor inspire them to look past old hurts and misconceptions and give romance a chance? One Lucky Night is a collection of five sexy interwoven novelettes by Aria Kane, Grace Teague, Ana Blaze, Constance Phillips, and Melinda Dozier.

Lucky Break by Aria Kane
Four years ago, chef Derek Chase walked out of Andrea Rivera’s life after a tragedy neither of them were prepared to deal with. When she’s called to the Brazen Head to repair a dishwasher, old sparks ignite buried feelings.

Lucky Star by Grace Teague
When her life is threatened by a mugger, Charlotte Price realizes she's in love with her best friend, Tommy Leung. The Brazen Head seems like the perfect neutral place to confess her feelings, but nothing goes according to plan.

A New Tune by Ana Blaze
When it comes to dating, Holly Hall has one unbreakable rule: no musicians. Not even gorgeous ones. Especially not gorgeous ones. Dating them only leads to heartbreak. So why did she let singer-songwriter Cian O’Neill kiss her? And why is she thinking about doing it again?

Lexi’s Chance by Constance Phillips
As a bartender, Sean Whelan meets all kinds of women every night, but none turn his head the way that Lexi has. She’s been playing cat and mouse with him for weeks. Tonight, Sean’s determined to get Lexi to quit teasing and take a real chance on him.

Drink or Dare by Melinda Dozier
A bachelorette party Drink or Dare game pairs paramedic students, Rachel Robertson and Killian Whelan, in a flirting match. Soon, the dares threaten to turn their academic rivalry into something much more

And now for a special excerpt from one of the stories, written by one of my favorite new authors, CONSTANCE PHILLIPS... She tells the bartender's story. Her character Sean appears in all of the other stories, but only Constance reveals his sweet side, in a story both sweet and sizzling. Here's the sneak peak!

Excerpt from Lexi's Chance by Constance Phillips, from ONE LUCKY NIGHT:

How many hours had she wasted on this bar stool laughing at Sean’s jokes and doing her best to flirt back with someone who’d mastered the art? She’d spent way too much time looking for a sign of sincerity in the compliments he paid her and wishing on some abstract four leaf clover he’d suddenly become the kind of guy who’d be happy with just one lady.

Was she just pretty enough to flirt with, but not over-the-top hot, unlike the nearly six-foot red-head with willowy legs and ample breasts he poured drinks for now? Why was that woman at The Brazen Head instead of walking a fashion runway in New York?

She used her shoulder to tap Julie. “What is it about her?”

“The woman Sean can’t take his eyes off of.”

Only his gaze wasn’t as locked as she believed. As if he could feel her stare on him, he turned and caught her. One wink from him and her heart turned into a gooey mess. She pivoted away, hoping he didn’t catch the blush that warmed her cheeks. “How does he do that to me? I’m not fifteen anymore.”

Julie snickered. “I think the bigger question is why do you keep resisting him? He is so gorgeous!”

“And he knows it!” Lexi shifted her weight on the stool. “I’m an intelligent woman. I should be able to see through all that flirting.”

“No!” She could no longer imagine herself anywhere else on a Friday night. Especially tonight, this is where she wanted to be. Three years had passed since her choices had inflicted life-altering pain on her sister. Going home and facing Alissa and the past hovered low on her to-do list. It took all the strength she could muster to deal with the not-so-distant past repeating itself with Billy. “We’ve already ordered our food.” Lexi reached for her wine glass, hoping to drown the regrets.

Julie pushed her buttons on purpose. She’d been advising Lexi to take the lead and speak her heart for weeks now.


BUY IT NOW ON AMAZON
Posted by Katie O'Sullivan at 5:45 AM