Reconnecting with the Past

Cape Cod Weather today: Still pitch black - no sign of even the slightest glimmer of sunrise. Not a good sign for the day. It's already been raining for 3 or 4 days straight, and the pool is so full it's up over the edges...

I went to my high school reunion over the weekend. I went back to New Jersey. On purpose.

I haven't been back there or spoken to anyone since we graduated, really. My parents moved to Vermont when I was a freshman in college. I kept in touch with one or two people - then my best friend died and I didn't want to go anywhere near anything or anyone who reminded me of her.

But another friend called and needled me into it. "If I can go back from Kansas, you can come too," she told me. "My mom still lives in town - stay at my house!"

I didn't take my husband or kids with me, I just went. Two other friends met us at this girl's house as well, so there were four of us who walked into the event together, leaving our husbands and kids and current lives somewhere else so we could step back in time for a few hours.

It was fun seeing so many faces from my past - the faces don't really change. The hair changes, the body gets fatter or thinner, but the eyes remain the same (even on the guys who now wear glasses!) The restaurant had a huge outdoor deck with a bar, and dim lighting so as to soften the wrinkles on all our aging faces. It helped. As did the wine and beer, mellowing our fears and smoothing the fractures of time. Making it easier to talk about our kids without feeling obligated to whip out photos, letting people share the sorrow of divorce and loss without the harsh light of day...

Was it worth a total of 10 hours of driving, through pouring rain both days? Worth the $55 admission price, plus hostess gifts, plus gas? Worth all the stress of going through my closet, repeatedly, trying to figure out what to wear that wouldn't make me self-conscious?

Yeah, it was worth it. I would totally recommend going back for your reunion to anyone who asks. High school looms large in the fears of many, as a time in their past when everyone else had it all together while they themselves had no clue. At least, that was me. But come to find out, everyone else felt pretty much the same way. And 25 years later, we've all figured out who we want to be and are there or on our ways to getting there on our own. It was fun to share that with people who are at the same stage of life, going through similar things.


Posted by Katie O'Sullivan at 5:55 AM No comments:

Cape Cod Weather Today: It started out sunny and beautiful... I took the dogs to the beach, rode my bike, mowed the lawn, reseeded the front... but the clouds rolled in at lunchtime, and now the sky is overcast and grey. The wind is cold, and speaks of potential storms, which don't bode well for the Cranberry Festival Fireworks we're supposed to attend....

Last night in an interview, John McCain tried to quote an old saying, "If you want to get something done, ask a busy person." He babbled on about busy people being busier and if you want to be busy you'll get something busy and busy is as busy does....

If you didn't already know the saying, you would have no idea what he was talking about.

I do, however, know that particular saying. I live by those words. I am a busy person.

With three kids, each going in at least two directions at once, I'm a busy mom. Soccer mom, band roadie, Brownie leader, you name we've tried it. I also have two dogs whom I seem to be the primary if not only caretaker for, as well as a husband who travels constantly if not more. So I'm the one who mows the lawn and takes care of the pool and gets the oil changed and rode my bicycle to the mechanic's shop this morning to pick up my husband's truck (after the brakes went out on me when I was taking his mother's couch to the dump...)

And I write. I recently received an offer for a contract on one of my completed novels. Hurray for me! "The contract should arrive in the next two weeks, but in the meantime, here are the style guidelines to fit your manuscript into as soon as possible..." and tomorrow was the first day of school for the kids.

But hey, they were off to school. And I finished formatting and sent the manuscript back again.

And then my mother called with a project for me, to update the family history that I'd put together eleven years ago (and two children ago) The reunion is the weekend after Columbus Day (when we'll be hosting friends for the weekend with their four children and Yellow Lab)

Of course I said yes. Why not?

But I've been working on a manuscript that plays off this family history as well - haven't done much over the summer, but was going to get back to it. So now my dilemma is: Do I try to rush and finish the manuscript to include in the history we hand out in four weeks at reunion? Do I include the first 50 pages which I've already completed, and summarize the rest in the preface?
Or do I leave it out entirely?


I'm having trouble focusing, but leaning toward handing out what I already have written.

I think I'm too busy to do a good job on creating right now.
Posted by Katie O'Sullivan at 4:40 PM No comments: 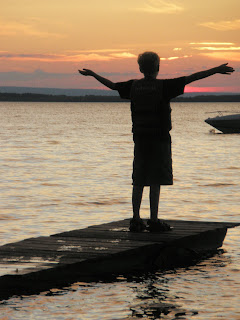 Summer is officially at an end. Today is the first day of school in our town... and the kids are just as happy about it as I am. Well, almost as happy as I am.

This year especially my children felt the same way. They were all done with each other and all of their togetherness. They each need their own group of friends to hang out with, interact with, laugh with, argue with, etc., etc., etc.

I need to find a new writing group, to have coffee and share new ideas with. It's been great having my 10-year-old be my test reader all summer, but I'm feeling the need for more adult input and validation. And coffee. Always more coffee.

So, here's hoping that it will be an exciting and productive new school year for all of us - my three kids, my husband, and myself. Individually and all together.

But without all the togetherness.

Posted by Katie O'Sullivan at 10:05 AM No comments: