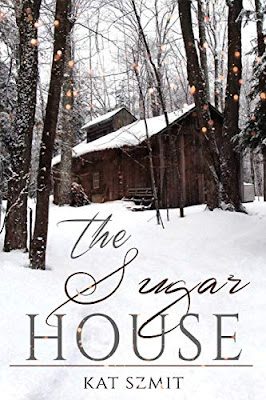 As kids growing up in Walton, New Hampshire, Penny McAllister and Ethan Dunford were nearly inseparable and a childhood friendship blossomed into love. But in 1986, days before prom, an act of unspeakable violence tore the two apart. Decades later, her parents gone, Penny has returned to ready her family homestead for sale, wanting nothing more than to lay the ghosts of the past to rest and get as far away from Walton as possible. But a mysterious visitor to the vacant backyard sugar house sets in motion a new relationship that could have Penny thinking twice about selling, especially after she learns that Ethan is still in town, and single. With a possible, new future laid out before them, can these three people finally find a path to healing among the Walton woods and sugar maples?

Prior to Christmas, my son and I went to Chatham to grab two specific gifts for my husband. Parking was not as scarce as it is during most holiday seasons - an upside to the pandemic, I guess - but we still had to walk a few blocks to get to the stores we were heading for. Masks on and head down, we were surprised to see an author sitting at a sidewalk table in front of a local bookstore, a pile of books at her side. Even more surprising was that she recognized us from my Instagram posts of my son and our new puppies, despite our masks.

My son had just dyed his hair a brilliant shade of red, which tipped her off.

Cape Cod can be a very small place. Especially in the off season.

We stopped to chat, and talked about her new book. A first novel is a big deal, and I was happy to support her (and happy that the premise sounded interesting.) I purchased a copy, had her sign it and continued on the quest for Christmas gifts. I put the book on my shelf and forgot about it in the semi-chaos of end of quarter at work on top of the holidays...

And then I found it again New Years Day, quickly losing myself in the lyrical narrative.

THE SUGAR HOUSE is a wonderful debut novel from a talented writer. Told in a third person with a literary fiction style, this is a story of emotional discovery, forgiveness, and reconciliation with the past. Moving back and forth in time, the author tells a story of childhood friends with large obstacles to overcome, one of which is three decades of separation.

Each of the three main characters have secrets from the others, some from the past and some from the present. Secrets that keep them apart, keep them from fully knowing and trusting the other. As each secret is revealed, another layer peels away until the truth is all that's left.

At the start of the story, Penny McAllister returns to her New Hampshire hometown six months after the passing of her father. She left home at 18 under a cloud of whispers, attending college on the opposite coast and never returning for more than a day or two at a time. Now that both of her parents are dead, she's determined to put their house on the market and close the door on that chapter of her life forever.

Digging through boxes stirs memories, both heartwarming and painful, and she's surprised when the good memories begin to outweigh the bad. Discovering a trespasser in the property's outbuilding - her dad's old sugaring house - changes her plans for a quick turnaround on the property. A tentative friendship blossoms as Penny connects to the young girl through cooking lessons, and for a while the reader is the only one who knows how all three of the characters are connected, or that the girl's father is Penny's childhood friend.

Kat Szmit is a master wordsmith, painting the landscape of a small town, rural community with her words with complete accuracy. She lovingly describes the cooking and baking lessons between Penny and Mickey in such detail the reader can almost smell the freshly baking bread and bubbling tomato sauce. (Should the author consider a second edition, I would humbly recommend adding some of Penny's recipes at the end.)

The author fluctuates between points of view, even dropping in a few omniscient narrator paragraphs once in a while, so if head hopping bugs you as a reader, be forewarned. Other than that, this is a solid debut novel and a thoroughly compelling read. Five sparkling stars for a new-to-me author.

Available at Cape Cod bookstores (like the Yellow Umbrella in Chatham, where I bought mine.)

Also available on AMAZON in Kindle or paperback