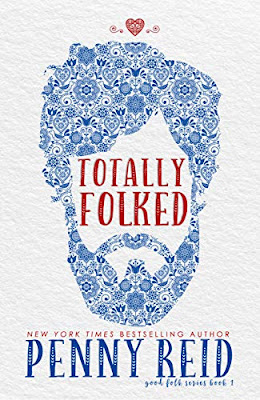 One unforgettable night leads to an unlikely shared connection, and unlikely connections never go unnoticed by the good folks in Green Valley, Tennessee. . .

Jackson James follows the rules. He has to. He’s a sheriff’s deputy in a super small town with a super big personality. However, strict adherence to the law during the day has been enjoyably balanced by rakish rules at night. Jackson, typically happy to protect and serve (and serve, and serve), starts questioning the value of wayward evenings when getting laid starts to feel more like being waylaid. Could it be that Green Valley’s most eligible—and notorious—bachelor longs for something (and someone) real?

Mega movie star Raquel Ezra follows only one rule: always leave them wanting more. Studio execs, reporters, audiences, fans, lovers—no one can get enough of the smart, savvy, and sexy bombshell. But when “generous offers” begin to feel more like excessive demands, years of always leaving has the elusive starlet longing for something (and perhaps someone) lasting.

When Raquel abruptly returns to the quirky Tennessee hamlet, her path crosses with the delectable deputy with whom she spent one unforgettable night. Unfortunately, scandal and intrigue soon follow. Raquel and Jackson must decide which is more important: following their rules? Or, at long last, finding something real.

Have you read any Penny Reid books? If not, you need to get acquainted with the wonderful, quirky, smart, comedy-prone, fast-paced, fabulous author and her books.  Her Knitting in the City series is to die for - or at least to curl up on the couch for a weekend and read non-stop, not leaving except maybe to use the bathroom or refill your wine glass. But I absolutely love her Winston Brothers series, which she cleverly spun into a whole universe for other writers to play in. Except I didn't realize she'd reserved some of the characters for herself - but boy, am I glad she did.

Jackson James is a deputy sheriff in Green Valley, with big shoes to fill and big expectations to meet, considering that his daddy's been the sheriff forever. No one expects more out of Jackson than he does of himself, and in the Winston Brothers series he comes off as a bit of an uptight prick, especially when he's trying to arrest the heroes of those books...

Like the rest of the Green Valley stories, TOTALLY FOLKED is told in alternating first person POVs between Jackson and Rae, otherwise known as Raquel Ezra, mega-movie star and Hollywood sex symbol. Which may seem contrived, unless you've read the previous books and know one of the Winston brothers met (and eventually married) a Hollywood star when she was filming on location in the State Park where he was a ranger.

Their love affair is an emotional rollercoaster with so many levels you'll want to flip back to page one as soon as you hit "the end", just to experience the ride all over again. Which you should totally do. Unless you haven't read the other previous books. In that case, you should totally START WITH BOOK ONE AND READ THEM ALL.

You can grab TOTALLY FOLKED on AMAZON

Posted by Katie O'Sullivan at 7:34 AM No comments: 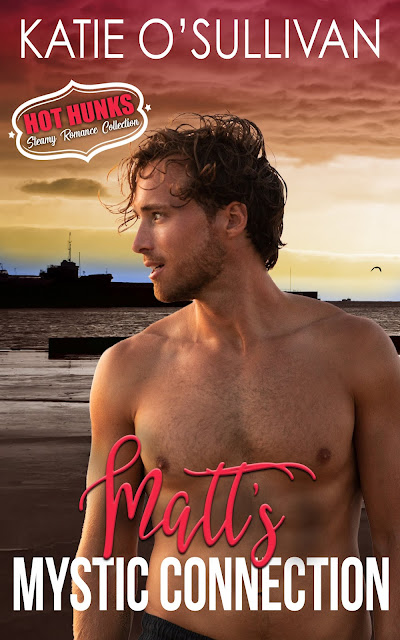 More Hot Hunks Steamy Romance books are coming your way! This time, all the stories center in Mystic Connecticut, that bustling seaside town along the banks of the Long Island Sound. Like always, each of the eight stories is a standalone romance by a different author. You can read them in any order, read one or read all. Eight hot hunks discovering love...

Here's the blurb for my contribution to the collection:

Sparks fly when Sam meets Matt at a kiteboarding tournament in Mystic, Connecticut, where the sizzling connection between them is almost combustible.

Samantha Jones moved to Cape Cod at the age of ten, in the wake of Hurricane Katrina. Between wrangling first graders and caring for her aging grandmother, she doesn’t have time for serious relationships. Every free moment is spent on the water, and the money from the sponsorships doesn’t hurt.

Up until recently, Matthew Daniels had it all: great job, cool apartment in the heart of San Francisco, and a girlfriend he was ready to take the next step with. Now, all that’s left is the job at the up and coming kiteboard brand. He’s hoping a fresh start on the East coast – back with all of his college buddies – will be the hard reset he needs to get his life back on track. What he doesn’t anticipate is the unforgettable woman he meets in Mystic.

In the quaint seaside town of Mystic, Connecticut, love is in the air—and who knows where you might encounter a look, a smile, a kiss… that moment when you know your whole life is about to change. It could happen at the Seaport Museum, the Mystic Aquarium, at famous Mystic Pizza, or on a romantic sailboat cruise. Maybe even a Sunday outing at the Elm Grove Cemetery like they did in the late 1900's, strolling in the salt-kissed breeze.

Eight hunky guys, each on his own path through life, navigate their way through the rich history of Mystic, discovering steamy romance along the way.

Since this is me, I'm still working on my story, but can I tell you I'm totally in love with these characters! If you've read my other books, you may recognize the main character Samantha as Eliza's best friend in BATTLING BENJAMIN, the elementary school teacher with the smart mouth who always talks in exclamation points when she's out with her friends. She's a bit of a complicated character - probably too complicated for a shorter novel, so we'll see how long this one turns out in the end.  Matt started as a cartoon outline of a guy I met on the beach over the winter - there are a ton of kiteboarders who congregate at a beach a few miles from my house, and we were walking the dogs along there over the winter quite a bit. But my character Matt has surprised me at a few turns, and keeps revealing more hidden depth than I'd initially given him credit for. And the cover! I love this cover a lot, so I'm hoping my story lives up to the hype.

All the new Hot Hunks are available for preorder now, individually or as a set, from AMAZON. 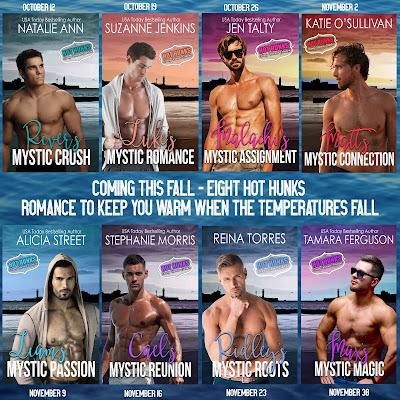 Posted by Katie O'Sullivan at 7:25 AM No comments: