Milestones and the End of Summer

My youngest child turned 12 this week, and I think I've gone into a bit of denial. No more little kids. No, she's not "technically" a teenager, but she looks and acts like one in almost every respect. I know that's not necesarily true for all 12-year-olds, but with 2 older brothers, she's matured more quickly than some.

It's bittersweet in so many ways. Not that I miss diapers and crayon drawings on the walls, but... I miss all the other stuff that comes with little kids. And not that big kids aren't fun to hang out with too, but... it's all different now.

On the other hand, I think she's just frustrated that she's NOT officially a teenager yet. Not old enough (in our home) for her own cell phone. Not old enough for high school. Still "officially" a kid.

I told my daughter she could have anything she wanted on her birthday cake. It's her first store-bought cake in 12 years. I immediately had to take back my statement as I proceeded to reject her first few ideas.

We settled on a cake that sums up how we both feel about this milestone. 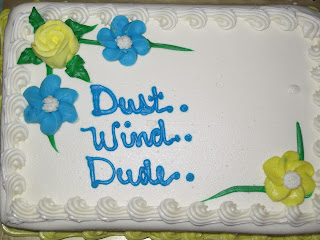 Posted by Katie O'Sullivan at 7:26 PM