The Snarkology Halloween Hop is Here! #Excerpt and #Giveaway 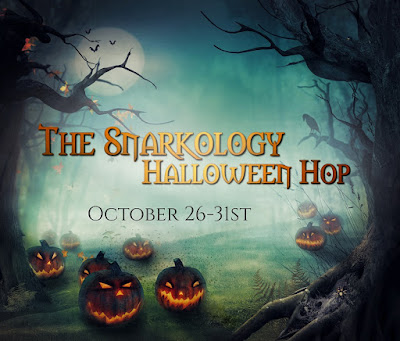 Thank you for following the Snarkology Halloween Hop from Oct. 26th thru 31st for the opportunity to discover fun, great books, and awesome prizes!

You can bookmark the hop landing page so you’re able to return at your leisure to "trick or treat" at the seventy-plus participating sites. The Rafflecopter is on the landing page to enter in the Hopwide Giveaway for a chance to win one of several (BIG!) gift cards that are up for grabs. Follow the hop for fun treats, great books and awesome prizes!

For my Halloween Hop Treat, I'm offering up an excerpt from my ghost story - GHOSTS DON'T LIE as well as the opportunity to win one of two ecopies of my book. For your first chance to win, visit the previous post on this blog (HERE) to read my real-life ghost story and share your own in the comments. For the second chance to win, visit and like my Facebook author page, and comment on the latest post there to let me know you want to win my book...


"If your husband’s been lying to you about so many things, maybe you need to start over.”

“I haven’t been totally honest with him either, I guess.” Jillian sighed and leaned her head against the window again.

The light turned green and he stepped on the accelerator. “Are you secretly an adulterous drug addict, too?”

“No,” Jill said quietly. “But I am a ghost whisperer. I never told him about that part of my life.” She turned to look at Parker. “That’s why you left me in college, isn’t it? Because I wouldn’t tap into that part of myself for you when you asked. I wouldn’t contact Steven.”

Parker’s back stiffened at the mention of his brother. Before he could reply, Jillian spoke again. “He came to me, you know. A few weeks after you took off for the west coast.” She shook her head and gave a small, sad laugh. “He said you were always a little slow, but you’d eventually come back. I’d totally forgotten about his visit. And now here you finally are.”

“Did he tell you what happened?” Parker’s voice sounded casual, but Jillian saw his knuckles turning white against the steering wheel.

She closed her eyes and considered his question. Instead of answering, she posed her own. “I thought you were going to study physics and discover the secrets of the universe. What made you switch to medicine?”

“Because of Steven. To finish what he started, what was taken away from him. My parents were pleased with my choice.”

“And are you happy?”

Parker paused. “Every person I help, every life I save, makes me feel like I’m doing something…right. Something to make a difference in the world.” He glanced over at Jillian as he slowed the car at another red light. “Do you know what I mean?”

Jillian nodded. “That’s what makes you a good doctor. Steven didn’t feel that way, though. All he felt was the pressure of being perfect.”

“My brother loved being a doctor. Someone denied him that future when they killed him.”

“I think he enjoyed medical school. Your brother liked being a student. But that internship at Columbia Presbyterian put the practice of medicine in a different light for him.”

“What are you saying, Jill? He took his own life to avoid being a doctor? That’s absurd.” Parker clenched his jaw and stepped hard on the accelerator when the light changed.

“The suicide was an accident,” Jillian whispered, gripping the armrest.

“It wasn’t suicide.” Parker took the corner a little too fast. “Someone else was there and it was their fault. The police stopped looking.”

The speed of the car made her uneasy, but she focused on the conversation. “You know Steven took drugs. He used them to get through the internship, to numb his mind to the situation. He didn’t know how to tell your parents that he wanted to quit medicine.”

Her stomach lurched as the car screeched around another corner. Jillian closed her eyes and tried to use a soothing voice, as if it were one of her kids upset. “Parker, you knew he was using way before the overdose. Remember when he’d come by our apartment, wasted out of his mind?”

“He was drunk. ‘Work hard, play harder’ was his motto.” Parker sped through an intersection as the stoplight changed from yellow to red, not bothering to apply the brakes at all.

Another car barely missed hitting them and Jillian squealed. “Slow down! That was a red light!”

He glowered but said nothing. The only way she knew he heard was his return to a slightly more acceptable speed. Still fast, but less reckless. A black cloud of silence filled the car as the darkened road unfolding before the headlights. Jillian closed her eyes once again, willing her heart rate to return to normal. I shouldn’t have told him anything. He doesn’t want to know, kind of like I don’t really want to know the truth about Alexandra and Kyle.

The uneasy silence continued until Parker turned the car into their neighborhood. Jillian finally spoke. “I’m sorry about Steven.”

“Yeah, me too.” The car careened into the Rogers’ driveway and came to a jolting stop.

Jillian stared at Parker. “What a night, huh?”

Parker barked out a laugh, white knuckles still gripping the steering wheel. “Yeah. What a night.” He turned his head toward Jillian, exhaling heavily. “Look, I’m sorry about the confrontation with Alex. I shouldn’t have brought her to Tony’s. Especially not with your friends there.”

“No, no, it’s okay. There’ve been too many lies in my world lately. I needed a dose of truth. In a way I’m glad Gretchen and Deb were there to hear it. It made me listen to her instead of running away.” She reached over and awkwardly patted his arm. “I’m glad you’re my friend, Parker. I didn’t know how much I missed you until you came back into my reality.”

“Yeah, me too.” Releasing his death grip on the steering wheel, Parker touched Jillian’s cheek. “I want you to know I’ll stick around this time. If that’s what you want.” She could barely make out his eyes in the darkness. “Is that what you want?”

The warmth of his hand was comforting and familiar, despite their years apart. And yet… there was no spark between them. No jolt of awareness demanding her to sit up and take notice. As much as she liked Parker and really had missed him, she didn’t want him as anything more than a friend. “I meant it when I said I’m glad we’ve rekindled our friendship, Parker, but that’s all it’s going to be. Friends.”

She opened the car door and gave him a last sad smile. “I’ll see you at the hospital in the morning.”
Jillian walked slowly to her front door, braced against the chill of the evening. She hoped her mother and father would already be asleep—she couldn’t handle any more confrontations tonight. Not about Edith’s accident or Kyle’s sexual proclivities or the death of Parker’s brother. There would be time enough for all of that, after she’d had a long talk with her great aunt or her grandmother.

Why hadn’t one of them told her everything before? Jillian knew that the people in her life sometimes twisted the truth to suit their own needs, but her grandmother would never do that.

But apparently they didn’t always tell the whole truth.

Posted by Katie O'Sullivan at 6:00 PM