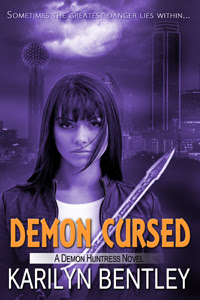 
Gin Crawford, the world's newest demon huntress, just wants to enjoy a football game, but finds herself hunting a serial killer minion instead. When his victims turn out to be the local football star’s female fans, she must determine if the player has joined forces with the minion, but her efforts lead her deeper into danger. When her mentor, Aidan Smythe, is attacked, Gin resolves to go to any lengths to save him, even if it exposes her most tightly held secret. Minions and demons, however, aren't the only terrors she faces. Will she realize the greatest danger lies within—before it's too late?

Demon Cursed  is the third book in Bentley's Demon Huntress series, and if you haven't met Gin Crawford yet, you need to catch up! Fast!

Gin Crawford was a fairly ordinary ER nurse with empathic abilities and a troubled past.  Then she was gifted with a special silver bracelet, a justitia that turns into a sword in the presence of demons. And it came with her very own super sexy Mage, the dark and brooding Smythe.

Bentley writes with a snarky first person POV from Gin's perspective that is both audacious and totally self deprecating, and sucks you right in along her high speed journey. It's not as much of a roller coaster as a first time luge ride, fast and furious into uncharted territory. The reader discovers everything right alongside Gin, as consorting with demons is as new to her as it is to the reader, and she pulls no punches in the telling.

Although this could really stand on its own and be a satisfying read, I totally recommend starting at the beginning of the series and reading them all. And if you haven't already read the first two books in the series, you should probably stop reading this review.

Okay. Everyone who's left reading this review is caught up with all things demon huntress, right? Because only readers will understand when I say...

Thank God that Gin and Smythe finally kissed! Hurray for a little heavy petting after all the smoldering tension! The heat between them has been growing to impossible heights, but their first kiss seemed well worth the wait. And no, I'm not going to tell you if they get beyond kissing, you need to read it for yourself!

Smythe's jealousy over the football player was actually pretty cute. At first. With what we know of his broken past, I guess the reader shouldn't be surprised that jealousy and mistrust come so easily to Smythe, but I wanted to reach through the pages to shake some sense into him.

The middle of a series can be hard ... Book 3 of a 5 book series is traditionally a point when our hero and/or heroine faces their inner demons (as well as, you know, the actual demons they're chasing and trying to kill) and the characters reach their lowest point, where they need to make the choices that will lead them to ruin or redemption. Bentley gives us a great example of this, but no, I'm not spilling the details. Read it for yourself, and join me on the twitter bandwagon to urge the author to write faster and get us book 4 soon!

If you enjoy Urban Fantasy and strong but flawed female heroines,  I totally recommend this series and this author. Grab a copy on Amazon.