Writing Wednesday: Painting Word Pictures and an #Excerpt from DESCENT

One of the things I like best about writing is painting word pictures in the reader's mind. Helping them see what I'm seeing as I imagine the scene and furiously jot down the imagery before it fades. As I see it, there are three basic aspects to a story, whether it's written or just you telling a friend about that crazy thing you saw on the way to work:

Some authors are better at one than the other, or good at two but can't get the third to save their skin. A story - especially a novel - really must have all three to work well.

1. There has to be action to keep the pages turning.
2. The characters have to make you care about them - not necessarily like them, but care what happens. If you don't care about them, why spend time with them?
3. The reader needs to be able to picture it in their head, like a movie playing on an inner screen.

As an author you should strive to make all three as strong as you possibly can, especially in YA fiction. Granted, you won't ever connect with every reader, but the idea of sparking a young imagination has to be one of the most exciting motivators out there.

I find the hardest part of the triangle for me is the plot. I always have a vague idea of what's going to happen, but getting from point A to point B can be a long, drawn out process. One of these days I'll take a plotting class and finally figure out how to do this most efficiently.

Settings, however, I love. Weaving details into descriptions and adding little nuggets here and there gets me excited to write and create. The trick is not to leave strings of adjectives and adverbs trailing all over the place. Turn adjectives into action. Easier said than done. Add details that resonate in the reader's mind, making them able to paint their own picture of the scene. Don't forget the other senses when you're painting with words - the more of them you can engage the more immersive the experience for the reader.

Here's an excerpt from the first book in my mermaid series that I loved writing, and still love reading. Take note of the little details and see it from the main character's eyes, or even better - try to picture yourself in a darkened theatre watching this on a big screen. (oh how I wish...)

EXCERPT FROM DESCENT (Son of a Mermaid, Book One):

Shea squinted his eyes against the glare. The bright sunshine sparkled on the river’s surface as the water rushed back from the ocean, the swift current creating streams of light out of the reflected brilliance.
“I love watching the tide come in,” Hailey said. The pair sat on the edge of the dock mesmerized by the flowing water, bare feet dangling inches above the rising surface. Fishing poles and sandals lay discarded behind them on the wooden walkway. “It’s like the river went out to play in the ocean and is now rushing home for lunch.”
He elbowed her ribs. “You think about food all of the time, you know that?”
She turned and grinned. “I’m food deprived. Have I mentioned my mom can’t cook?”
“Only forty million times. And I’ve only known you about a week!” He paused, watching a seagull wheel overhead. “Finding all those wooden lures this morning really made me want to go fishing. You didn’t have to tag along.”
“I wanted to,” Hailey insisted, turning her face upward to watch the same gull. “Fishing is a good Cape Cod experience, and it gets me out of the house. Chip has been awful to live with lately.”
“He still doesn’t like it here?”
Hailey shook her head. She stood up on the dock and pulled her hot pink shirt over her head, revealing a plain, black one-piece bathing suit. “C’mon, Shea, let’s jump in.” She shimmied out of her shorts, dropped the clothes in a heap on the wooden dock, and cannonballed into the river.
He shielded his face with his arm across to block the splash. “Watch it! And no, I told you I don’t know how to swim. I’ll just sit up here and watch you drown.”
With an exaggerated pout, Hailey swam back toward him. “It’s no fun alone. Pull me back onto the dock.” He stood and bent to help her, but she tugged his arm instead.
He toppled into the river beside her. The blue-green coolness swirled as he tumbled down through the water, arms and legs flailing. He struggled to hold his breath, his cheeks puffing like a chipmunk. Somehow he managed to right himself, head over kicking feet, but still he sank into the murky depths.
Millions of air bubbles traced the path of his body, the precious oxygen escaping from his clothing and through his nose.
He hadn’t been kidding when he told Hailey he couldn’t swim. Suddenly, he realized he was inside a scene from one of his nightmares, except this time it was real. He was drowning.
Eyes wide with panic, he clawed helplessly at the water. A huge school of minnows parted down the middle to swim around him, surrounding him like walls on either side of his body. Turning his face upward, he saw Hailey’s legs kicking above him as he sank further and further under the water. He had no idea the river was this deep! How would he ever get back to the surface?
His throat and lungs burned from the effort of holding his breath. Darkness pressed hard against his eyes as he sank deeper, swirls of strange colors dancing in front of him as his whole body strained against the sudden lack of oxygen.
I need to breathe, he thought desperately, his whole body feeling like it was on fire. This isn’t a dream. I’m going to die! His flailing limbs slowed their movements when his feet finally thunked onto the mucky river bottom.
His eyes squeezed shut, an image of his father playing in his mind. Next to his dad, he saw the face from his dreams. The blonde woman, the one he now knew was his mother. The one who looked like a mermaid. If he opened his eyes now, would she be hovering in front of him, like in the dreams? Fear of the unknown shivered down his spine and his eyes stayed closed.
Searing pain ripped through his throat, as if his entire body would explode any second from the effort of holding his breath. Finally he opened his eyes, expecting to see her there by his side. Smiling at him. Reaching for his hand.
Nothing.
Nothing but swaying fronds of seaweed reaching up from the mucky river bottom, tangling themselves around his bare shins. There was no mermaid to save him.
He was going to die.
Finally, the pain overwhelmed him. He gave up trying to fight. Shea opened his mouth to exhale the stale air pounding like a jackhammer in his lungs. Large bubbles rushed to the surface in a hurry to escape. Water gushed in, filling his mouth and lungs. He struggled to breathe, but there was no air on the river bottom, only water.
Water that somehow acted like fresh air to his exhausted body.
I can breathe under water?
He took a second deep and satisfying breath. How could it be possible?
I’m breathing water! Maybe this is how drowning feels.
His head pounded and his body still felt like it was on fire… But he was breathing. Water. He sucked big mouthfuls in and out, faster and faster, realizing he wasn’t going to die after all.
Not…going…to die…
His eyes rolled backward and he drifted into shocked unconsciousness. 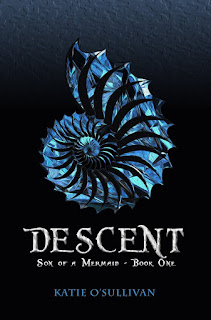 Grab a copy of DESCENT on AMAZON.