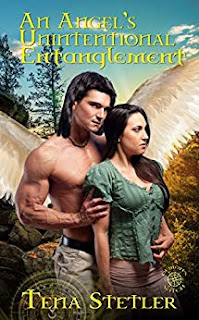 An Angel's Unintentional Entanglement, by Tena Stetler
Book 4 in the Demon's Witch series
Published August 2018, by The Wild Rose Press


Fallen warrior angel, Caden Silverwind, lives alone in Colorado's rugged Rockies, healing from physical wounds as well as the mental anguish suffered during battles with dark demons. Then he finds a woman barely clinging to life after a horrendous beating. He is not prepared for the entanglement she brings to his life, nor the feelings she awakens in him.

Bureau of Indian Affairs Agent, Mystic Rayne’s personal dilemma and assignment nearly gets her killed. Divine intervention is a complication she never expected and her growing attraction to Caden is undeniable. Can she trust him with her secret?

Their quest to uncover her attacker takes them from the pristine mountains in Colorado to the wilds of Wyoming. Along the way, they find answers which may place them in more danger. Determined to solve the mystery, they must also navigate their feelings and fears to find love and unite heaven and earth.

Fans of Ms. Stetler will be thrilled with this latest addition to her Demon's Witch series, which blends new characters in with old to expand the author's well-established paranormal world.

This is the first of the books to feature warrior angels as the main characters and heroes (although they've appeared in previous battles) as well as adding Native American shape shifters to the ever-growing paranormal menagerie. In Stetler's world, most of the "good guy" paranormal beings live normal, everyday lives -- even the Demon Overlord, who is a good guy, no surprise to fans of the series -- except when they need to amp up their powers to save the world or the humans they care about.

Caden Silverwind is a Warrior Angel who is on a much needed leave of absence to heal his body and his soul, after far too many years of battling the forces of darkness. The natural beauty of the Colorado Rockies and the fresh clean air are soothing to his mind and body - - until the morning he finds a young woman left for dead along the trail, her naked body severely beaten and covered with bites and scrapes. He takes her back to his campsite and brings her back from the brink of death, but her wounds can't be healed overnight and whatever happened to her has left her scared.

Mystic Rayne grew up on a Native American reservation in Wyoming, her father one of the tribal leaders. She left for Harvard Law School, and then on to work for the government with the Bureau of Indian Affairs. Her father's recent death left his position vacant, and she returned home to decide whether to move home and take his position as leader and Shaman. The tribe owns the parcel of land where Caden is camping, using it for ceremonial retreats, the reason Mystic came to Colorado.Her big secret? Her tribe are shape shifters with the ability to turn into wolves. She's a bit shocked when the information doesn't shock Caden, but then again, she has no idea...

The action shifts back and forth between Colorado and the Wyoming reservation and the casino it runs. Mystic knows something strange is going on there, and when Caden finds there are demons involved, it becomes a matter for his former team to handle. The larger question looms in the background of the consequences of Caden falling in love with a human, even if she is a shape shifter. As he warns her, an angel mates for life. Is that what she wants?

The action and story move along at a brisk pace, the relationship between the characters developing slowly and naturally. Having read the first few books in the series, it was fun to have some of those characters reappear as part of this story, but in very organic ways. All in all, a nice addition to this series.