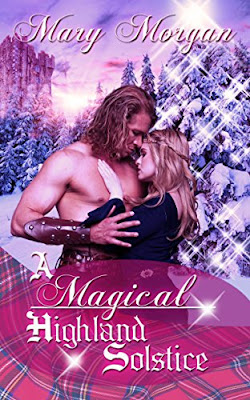 Laird Cormac Murray has witnessed how love destroyed his own father after the death of his mother, and he vows to never take a wife. Yet, when he comes upon a bewildered lass traveling alone, he finds his heart will no longer listen to his mind. In the end, Cormac risks everything to claim the love of a woman not of his time.

Eve Brannigan loves helping others and baking. After winning a contest, she is stunned to learn that the Clan Murray has requested her assistance to cater to their guests during the holiday season. When a lost path in Scotland leads her to a handsome but gruff Highlander, Eve fights the temptation to allow love to enter her heart for the first time.

Can the Fae and the magic of the Yule season bring together two souls who have forsaken love? Or will tragedies from the past separate the lovers forever?

Giving her no time to protest, he grabbed her around the waist and hauled her up onto Fingal. When he mounted his horse and settled behind her, Cormac felt her body stiffen as he placed an arm around her waist. He leaned next to her ear. Her mass of curls brushed his face, and he inhaled her scent—one of different spices. Lust instantly surged forth, powerful and intense. “Relax,” he urged in a hoarse voice. Though he found it difficult to do so himself.

He felt her tremble, but she nodded. Giving a tug on the reins, they moved up the path.

With each steady trot, her body swayed and Cormac tried to focus on the road. The castle.
Fighting in the lists. Bathing in the icy waters of the loch. Anything, but the soft curves of the lass’s body pressing against his own. What was wrong with him? He prided himself on being a man always in control of his emotions—especially his lustful ones. Yet, now he found himself confused, tongue-tied, and his gut twisted into knots.

So deep in his thoughts, he did not notice Fingal veering off the main road until the lass let out a giggle. She had the most musical sound, and he found himself smiling. Guiding his horse back to the path, he could hear his men doing their best to contain themselves. A glance back confirmed William was coughing loudly and Gordon trying his best not to fall off his horse.

“I swear Fingal, I am tempted to trade ye in for another horse. Ye must be going blind, or worse, old.”

His horse let out a large snort.

Eve clicked her tongue in disapproval. “For shame, Mr. Murray. How cruel. I think he’s a kind animal. Perhaps it’s the man holding the reins who can’t see clearly the path in front of him?”

The lass was quick with the wit, he mused. “I dinnae ken your word, but ye may call me Cormac.” He leaned near her again. “And I can assure ye, I am nae blind, nor old.”


Grab your copy on AMAZON