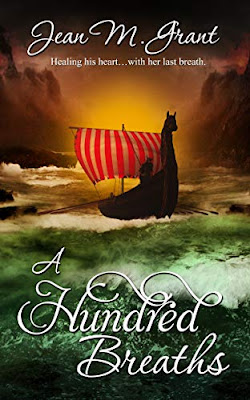 A Hundred Breaths, by Jean Grant
Published 2019 by The Wild Rose Press

Simon MacCoinneach's vengeance runs deep. The blade is the only way to end the blood-thirsty Nordmen's reign upon Scottish soil. His soul might be lost, but the mystical Healer he kidnaps from the isles could be the answer for his ailing mother...and his heart.

Isles-born Gwyn reluctantly agrees to a marriage alliance with this heathen Scot in return for the sanctuary of her younger brother from her abusive Norse father. Her brother's condition is beyond the scope of her Ancient power, for larger healings steal breaths of life from her own body.

As Simon and Gwyn fight to outwit her madman father and a resentful Norse betrothed, Gwyn softens Simon's heart with each merciful touch. Gwyn's Seer sister foresees a bloody battle--and an end to the Nordmen--but Simon will also die. Will Gwyn save Simon on the battlefield even if it means losing her last breath?

I love Diane Gabaldon's Highlander series as well as the History channel Vikings series... and this is nothing like either of those. There's no time travel involved, and the Vikings are not very sympathetic characters.

That's not to say I didn't love this book. I did. I loved it.

What it reminded me of was Marion Zimmer Bradley and her Mists of Avalon books which I was addicted to back in high school, where the paranormal is just another part of life for certain people and cultures. That's how it is for Gwyn and her family - at least her mother's family. Her father is a Viking lord who stole his mother in a forced marriage to keep her abilities for himself. Gwyn and her sibling also have the powers of the Ancients - Gwyn's ability is healing, but each time she heals she loses a bit of herself. Her father sees her as a tool, her betrothed sees her as a pawn in a larger power struggle, but she only wants to find a way to keep herself and her siblings safe.

When Simon MacCoinneach kidnaps her and proposes an end to the fighting through a marriage union, she reluctantly agrees to his terms, but there is more going on than either of them know.

The uneasy truce slowly blossoms into friendship and then feelings... and I loved the organic way the author lets those feeling develop. Jean Grant does a wonderful job of creating a rich historic portrait of the medieval villages, manors, and abbey, as well as painting sweeping coastal vistas true to the time period. She also gives us compelling characters who make you root for (or against) them and keep you turning pages late into the night.

A wonderful read, and highly recommend. Grab a copy on AMAZON.

Posted by Katie O'Sullivan at 7:35 AM