Monday Book Review: Forever in a Moment, by Charlotte O'Shay 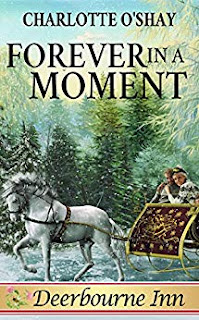 Forever in a Moment, By Charlotte O'Shay
part of the Deerbourne Inn series, by various authors
Published April 2019, by The Wild Rose Press

Samantha DeMartino's Christmas wedding is two weeks away when her fiancé calls the whole thing off. Word on the street: his cold feet are being heated by an old flame. With her well-ordered world in complete disarray, Sam's friends convince her to go on her honeymoon—alone. A week at a charming Vermont inn away from the city and her demanding corporate career could be just what she needs to figure out her next steps.

Between his twenty-four seven work schedule on his family's dairy farm and teaching tourists to ski, Jed Armstrong's too busy to think about how lonely he is...until Sam sings her way into his life during a Christmas blizzard. Now he has to figure out a way to convince her to stay.

Can a vivacious city girl find forever with a reclusive farmer?
Will her secret keep her from trying?

Told in first person, Forever in a Moment take us to Willow Springs, Vermont on a honeymoon-for-one. The narrator's fiance dumps her two weeks before their Christmas Eve wedding, and New York City lawyer Samantha (Sam) DeMartino ends up heading to Vermont alone in a blizzard for a solo vacation rather than a honeymoon.

But then her rental car runs out of gas and she's stranded by the side of the road in aforementioned blizzard. Jed Armstrong rescues her, and ends up being her ski instructor the very next day. Tall and sexy, with blue eyes a girl could happily drown in, he makes Sam realize that losing her fiance Ben to another woman wasn't the worst thing in the world. She feels a sizzle in her blood just looking at Jed that she never experienced with the man she was supposed to marry.

Sam spends the week re-evaluating her life and her priorities, and the reader gets stream-of-consciousness ringside seats to her thought process. In the entire book, there are two (only 2) chapters told from Jed's first person point of view, one in the middle and one at the very end. They give us a glimpse into what the strong, silent guy is really thinking. Jed is simple and straight-forward, as compared to the whirlwind chaotic thoughts of the heroine. Fun juxtaposition, although I almost wish there had been more from his POV.

The setting is the fictional Deerbourne Inn in the fictional Vermont town of Willow Springs. It's part of a series by this publisher, all by different authors but set in this town with this Inn as central to the action in some form. In this case, Sam is visiting from New York City for the 10 days from Christmas through New Years and staying at the Inn. The town itself is a bit like Stowe or Woodstock, Vermont, with a walking town of gift shops and restaurants, and a small town vibe where residents all know and look out for one another. This author does a nice job of setting the atmosphere of the town and surrounding area. Jed's family own a large dairy farm just outside of Willow Springs and supply cheese products and baked goods to many of the restaurants in town.

I thoroughly enjoyed this story, laughing along with the snarky self-deprecating narrator and applauding her inner turmoil as she uses the solo honeymoon to decide what she wants out of life. Set during the busy holiday week in Vermont, it's not really a "holiday" story, but more of a journey of self-discovery for one woman, and made a fun read even in spring. Highly recommend.