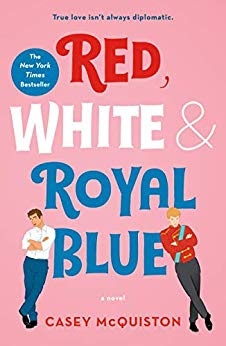 
What happens when America's First Son falls in love with the Prince of Wales?

When his mother became President, Alex Claremont-Diaz was promptly cast as the American equivalent of a young royal. Handsome, charismatic, genius—his image is pure millennial-marketing gold for the White House. There's only one problem: Alex has a beef with the actual prince, Henry, across the pond. And when the tabloids get hold of a photo involving an Alex-Henry altercation, U.S./British relations take a turn for the worse.

Heads of family, state, and other handlers devise a plan for damage control: staging a truce between the two rivals. What at first begins as a fake, Instragramable friendship grows deeper, and more dangerous, than either Alex or Henry could have imagined. Soon Alex finds himself hurtling into a secret romance with a surprisingly unstuffy Henry that could derail the campaign and upend two nations and begs the question: Can love save the world after all? Where do we find the courage, and the power, to be the people we are meant to be? And how can we learn to let our true colors shine through? Casey McQuiston's Red, White & Royal Blue proves: true love isn't always diplomatic.

This surprising, irreverent New Adult novel (or upper YA in a big stretch) is a great read, and while I usually stick with M/F romances I found myself really liking all of the characters and rooting for the satisfying happily ever after for the M/M leads, however unlikely it seemed it was going to be with every twist of the plot.

The novel also illustrates how much more difficult it can be to navigate both young love and prejudice at the same time. Prejudice of gender, sexual orientation, and also Alex's Mexican-American heritage. And it's also a coming-of-age novel in that Alex doesn't realize his bisexuality until we're well into the story and controversy.

The author says in her afterward that she was devastated by the hate and bigotry on display during the 2016 election cycle and wrote this book as a re-imagining of what our current world might look like in an alternate universe. One where love triumphs over hate, both during the 2016 election cycle and after. No, it's not all rainbows and roses for our star-crossed love birds, but messy and complicated, just like real life.

The author breaks rules and conventions, for example, writing a lot in the present tense despite not being in first person. But it works. It's snarky and irreverent and current and fast-paced and a truly un-pu-down-able read. I'd totally recommend this for your beach bag, but only if you intend to get to the beach at dawn and stay put in your reading chair until well into the night - I couldn't put it down.

5 stars and high fives and really great job to the author. I'll be looking for other works from them soon!

Find Buy Grab your copy on AMAZON - and while you're at it, buy one for a friend!
Posted by Katie O'Sullivan at 7:59 AM