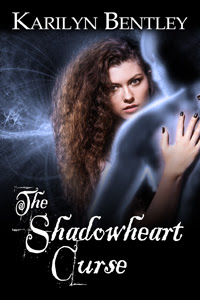 The Shadowheart Curse, by Karilyn Bentley
Published August 2019 by The Wild Rose Press


Escaping New York after a client's untimely death, medium Adrianna Sinclair flees to her family property in Italy. All she wants is to avoid ghosts, but an attractive one tempts her in ways she never knew possible.

Luca Fausto has been trapped on the Romani property for over a century for a crime he didn't commit. Adrianna may be the answer to breaking the curse that keeps him bound.

Standing in their way is a demonic spirit's plan for revenge. Will they prevail or will Luca be cursed to the shadows forever?

Adriana Sinclair is a well-known psychic in current-day New York City. Luca Fausto was the bookkeeper for a grain mill in the Italian countryside at the turn of the last century. A most unlikely hero and heroine for a love story. Especially when it's not a time travel romance in the classic sense of the genre, or even the Diane Gabaldon-twisted sense.

In 1910, Luca was cursed by the mill's owner, thrown from reality into the twilight spirit world along with his evil brother Marco. Luca's only crime was being in the wrong place at the wrong time, and now he's been trapped along with his brother for over a hundred years, destined to roam the mill property as a shadow, a spirit. Not really a ghost because he didn't really die.

Adriana has been able to see and talk with ghosts since she was a little girl, a gift passed down through generations of her family. As a medium, she connects spirits with their loved ones to give both the ghost and the living people some degree of closure. She takes pride in the fact that she helps these spirits move on to their final rest.

As the book begins, she's returned to Umbria, Italy on a sabbatical of sorts in the wake of a media storm after one of her clients was killed right outside her home. She blames herself for the death and vows to find a new line of work, one that doesn't involve conversing with the spirit world... until she encounters Luca. With his rugged good looks and the genteel manners of a time long past, she begins to fall for him - while wondering about her sanity, because, come on, he's a ghost. How's THAT going to work out? Read the book and find out!

I love the way Karilyn Bentley writes, although this story was a bit different than her Demon Huntress series (which I adored! All five books, and was so sorry to see them end!) While Adrianna has the same spunk and tenacity as Gin Crawford from that previous series, she's got less moxie and bravado, and a little less snark when the story first starts. Adrianna took the death of her client to heart and lost her confidence, I guess, and it's reflected in her tentative attitude. As the book progresses she regains some of her inner strength as well, which is good to see. Just in time to fight back against the evil.

The cursed brothers, Luca and Marco, exude the attitudes and language of their original time period, but are also earthier and less proper than I would expect them to be. Perhaps it's because they're originally from the counryside or perhaps it's because they've witnessed the world progressing for a hundred years, albeit from the shadows. And don't forget, Marco is evil - Bentley writes evil demons and their abilities with panache.

Unpredictable and filled with interesting twists on the spirit world, I enjoyed this ghost story romance. Four-and-a-half stars, because I really liked it, but didn't love it. I do recommend it if you enjoy ghosts and demons and stories where true love conquers all. One of the most exciting aspects is that it'll be turned into a movie, where they are planning to live stream the making of the movie... so you have to read it first. I can't wait to see how they portray the spirit/human interactions, and the ghostly underground cotillions. (See? Unpredictable!)

Grab your copy now on AMAZON ($3.99 on Kindle) and start reading!