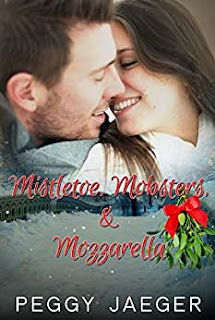 Finding a body in the freezer of the family deli isn’t the way Madonna San Valentino planned to start her day.

Adding insult to injury, the investigating detective is the one guy she’s never been able to forget. After seven minutes of heaven in the back seat of his car when they were teenagers, Tony Roma skipped town without so much as a thanks for the memory.

Just when Madonna thinks the present situation can’t get any worse, Tony is ordered to go undercover at the deli to ferret out a killer. Forced to work together, she vows to keep their relationship cool and professional. But with the sexy, longing looks he tosses her at every turn, Madonna’s resolve is weakening.

With Christmas drawing closer and Tony’s investigation taking an unexpected turn, Madonna is at her wit’s end. Can she really be falling for him again? And will he wind up leaving her broken hearted and alone like the last time?

I know, I know, it's a bit too early for Christmas stories - my own personal rule is to keep the holidays in order, so Christmas stuff shouldn't ever come before Thanksgiving, including Christmas-themed romance.

I made an exception.

This was a little bit of a departure for the author, with a dead body in the first chapter heightening the suspense factor, but she handled it with her usual wit and finesse. Or rather, her characters handled it. Ms. Jaeger has given us a few books starring the San Valentino family, a large but close-knit Italian famiglia in New York City who may or may not have shadowy whispers of mob connections. With this book, those whispers aren't necessarily confirmed, but the connection lines are penciled in a bit darker.

Donna and her father work at the family deli. She's the oldest and the only one of the siblings who does, although no one really defines what any of the other brothers do for a living, except the youngest who's in college. It's not like they couldn't use the help at the busy deli, but Donna's first person viewpoint tells us there is no hope that any of her lazy brothers would ever step up to join this family business.

With the busy Christmas season approaching the last thing she needs is to find her delivery guy stuffed into the walk-in freezer. Make that second to last. The Absolute last thing she needs is for her high school crush - the one who left without saying goodbye - to be the detective in charge of solving the mystery and finding the killer. Tony Roma is tall, dark, and handsome, and doesn't seem to remember the kisses they shared long ago. Donna working together with the hot hunk of detective leaves no doubt that a fuse has been set and something is going to explode.

I can't get into much more without giving away plot points, and it's a whole lot more fun to unravel the mystery - both the dead body and what's up with Tony -  alongside Donna and her crazy family.

Peggy Jaeger writes with such heart and feeling, pulling the reader right into the story and taking us for a rollercoaster of a ride. She continues with the strong themes that run through so many of her stories - the importance of family, trust, and forgiveness. It's such fun to revisit with these characters for the holidays again (A Kiss Under the Christmas Lights is one of my favorite holiday feel-good romances, also by Peggy Jaeger) If you're looking for a fun read to kick off your holiday book spree, give this one a shot. You won't be disappointed. 5 sparkling stars for this Christmas romance!

Posted by Katie O'Sullivan at 7:36 AM