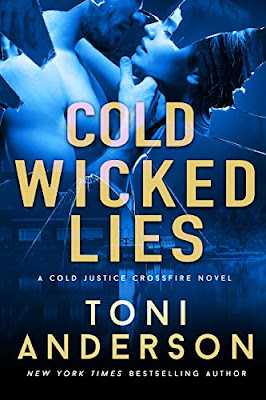 In an effort to halt an armed standoff, FBI negotiator Charlotte Blood tries to unravel the mystery of a young woman’s death on a remote mountainside. Pity she has to fight her stubborn, sexy, Hostage Rescue Team counterpart every step of the way.

As a highly skilled operative, HRT leader Payne Novak doesn’t have time to play detective or make nice with killers who flout the law. His focus is getting inside the compound and ending the siege as quickly as possible.

Forced to work together, the battle-hardened HRT team leader and the quietly determined negotiator figure out they might have more in common than they anticipated. As the clock ticks, Charlotte discovers there are some dangers she can’t talk her way out of, and the race to unearth long-buried lies becomes a matter of survival for everyone on the mountain.

I think I've mentioned before - and recently - that enemies to lovers is not my favorite romance trope. It usually feels forced. But I'm signed up to write one that's due out next year, so I thought I should explore how other authors handle the relationship in real and believable ways. Claire Marti did an excellent job with her recent Christmas story. And this weekend I read Toni Anderson's take on the trope in one of her recent Cold Justice: Crossfire series stories.

If you haven't read anything by Toni Anderson, what are you waiting for? She is an absolute genius of romantic suspense and FBI thrillers. I've read her entire Cold Justice series, and now the first three books of the Crossfire spinoff series. Gritty, detailed, believable suspense that will have you turning pages faster than you ever thought possible. Anderson drags you along on her wild roller coaster ride, kicking and screaming and eating up every word on the page.

FBI hostage negotiator Charlotte Blood has appeared in several other books, and I was glad to see she finally got her own story. The book takes on he said/she said dueling POVs, with several chapters sprinkled throughout in other character POVs to forward the plot. The instant antagonism between Charlotte and Payne Novak is palpable and feels justified, although their situation commander's solution seems contrived. Making the two pair so tightly wouldn't seem to be the most efficient way for anyone to get their jobs done. It does, however, give the pair insight into each other's motivations and drivers, and help them each see past the external face the other presents to the world.

With a ripped from the headlines plot, this fast-paced story kept me engrossed and engaged, with writing that crackled off the page and characters you wanted to root for. Totally recommend and give 5 shiny stars. Despite the fact that I've read all her books - and recommend all of them - I think this would easily work as a standalone read. Or, be like me and start at the beginning. The first book of the Cold Justice series is perma-free for Kindle, to suck you in. Believe me, you won't regret it.

Or, Grab the first book of the original series A COLD DARK PLACE on AMAZON

Posted by Katie O'Sullivan at 8:23 AM