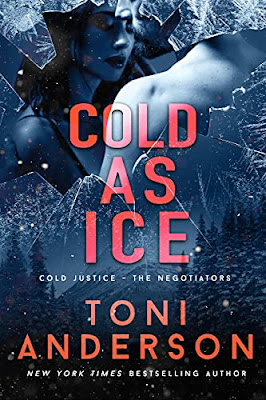 When Darby O'Roarke wakes up in a strange house with a dead man - with no memory of what happened - she knows who she has to call: FBI Supervisory Special Agent Eban Winters...the man she fell for, and who rejected her, last summer.

A negotiator isn't supposed to get involved with kidnap victims, and Eban has been trying to avoid the temptation that is Darby O'Roarke ever since they met. One frantic phone call has him racing to Alaska to uncover the truth, but he faces stubborn opposition from the local police, and a growing media frenzy.

Getting Darby released from jail and keeping her safe is his first priority. When another woman is brutally slain, evidence emerges that suggests Darby is being framed, and that the culprit is a vicious serial killer who has eluded the FBI for more than a decade...and, now, the killer has Darby in their sights.

This is the fifth book in the Cold Justice - The Negotiators series, and another winner from author Toni Anderson. I've read and loved every one of her Cold Justice books from both this series and the prior series, and have to say they keep getting better, the action tighter, the plots twistier. Anderson is a master of romantic suspense.

Readers met Darby O'Rourke previously in another book from the series, Colder than Sin, where she was kidnapped and held hostage by a terrorist group on a tropical island. It was then she first met Eban Winters, the FBI hostage rescue team negotiator who comes to her rescue again in this book.

This time, Darby's been framed for murder in her small University town in Alaska. The police think it's a slam dunk case, until Darby reaches out to her FBI friends for help. Eban hasn't been able to stop thinking about Darby since they first met, even though he knows he shouldn't get involved with a victim he's helped to rescue. Especially not one who went through the physical, mental and sexual traumas that she did. But he can't ignore her cry for help and rushes to Alaska to help the local cops find the real killer.

The story alternates POVs between Darby and Eban, with first person chapters from the killer scattered throughout. It's those chapters as much as the police investigation that give the reader clues as to the killer's identity - and yet I was still surprised at the end. Great attention to detail, with tons of red herrings thrown in, make this a really absorbing mystery to solve. Totally recommend this new release - and if you haven't read the previous books in this series or the original Cold Justice series, you are in for a huge treat!

Cold as Ice is now available on AMAZON